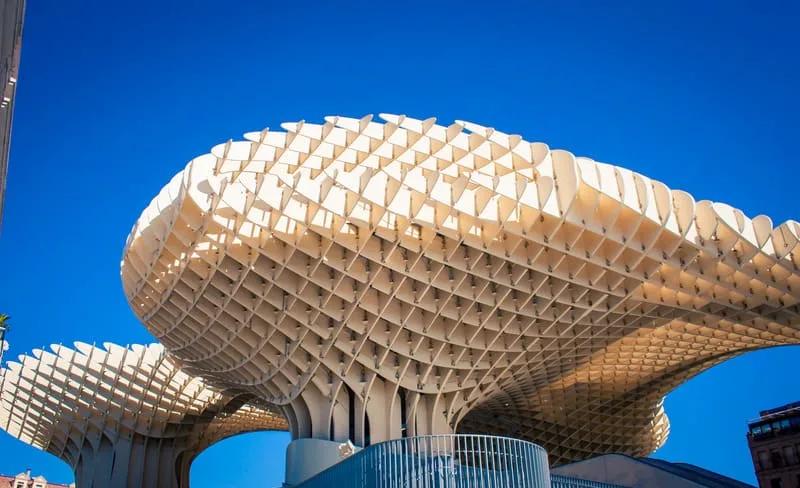 8 best neighborhoods in Seville for flamenco, tapas and Moorish architecture

Andalusia’s steamy capital of Seville is one of Spain’s most exciting cities, known for its vibrant flamenco scene, ornate Moorish architecture, picturesque plazas and some of the country’s best and most innovative tapas bars.

The city is built around the Casco Antiguo or Old Town and spreads out on either side of the River Guadalquivir. While the areas in the oldest part of the city have a similar feel with their jumble of narrow streets and charming courtyards, each neighborhood has its own individual character. You can easily explore most of them in one trip to the city. Here are the best neighborhoods to visit in Seville, barrio by barrio.

The Barrio Santa Cruz lies within the historic heart of the city in the Casco Antiguo – it is arguably the most famous neighborhood in Seville and one that every visitor to the city will spend time exploring. It comprises an atmospheric web of tiny streets lined with lively tapas bars and fountain-filled squares encircled by orange trees and colorful tiled benches. Santa Cruz is a very safe neighborhood – its narrow streets are well lit and it’s always full of life, even in the early hours of the morning.

Once the city’s old Jewish Quarter, the Barrio Santa Cruz is home to several of Seville’s most important sites, including the grand gothic Catedral with its famous Moorish bell tower, La Giralda, and the opulent Real Alcázar Moorish fortress and palace. It’s also where you’ll find the Museo del Baile Flamenco – the city’s fascinating flamenco museum, which also doubles as a theater for live performances.

Situated just north of the Barrio Santa Cruz, also within the Casco Antiguo, you’ll find the Barrio Alfalfa. Like its neighbor, it’s one of the city’s most iconic barrios, consisting of a tangle of narrow alleys connected by lively squares. It’s centered around the Plaza Alfalfa, which once held a live pet market on Sundays and is now lined with popular cafes and restaurants. Visit the elegant Plaza del Pan with its independent shops, the wide Plaza de la Pescadería and the leafy green Plaza del Cristo de Burgos. The neighborhood’s main tourist site is the stunning Casa de Pilatos – an elaborate Mudéjar-style Andalusian palace. In recent years, Alfalfa has quickly become one of the coolest neighborhoods in Seville, thanks to the area dubbed Soho Benita – a collection of funky independent shops, boutiques, bars and hotels across six streets on the edge of the neighborhood. 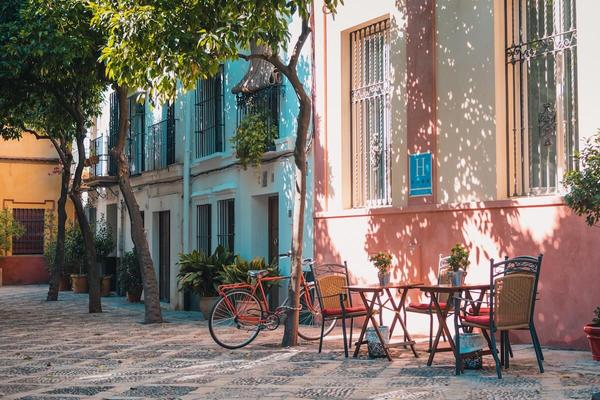 Arenal sits on the left bank of the Guadalquivir River and is part of the old town, bordering both Barrio Santa Cruz and El Centro, and extends from the cathedral down to the river. Along with the other neighborhoods of Seville's old town – Barrio Santa Cruz and Alfalfa – it’s one of the best areas to stay with many independent hotels. A vibrant and buzzing area, Arenal is dotted with lots of great tapas bars and restaurants and is home to some of the city’s most important monuments. These include the riverside walkway of the Paseo Christobal Colon with its 13th-century watchtower, the Torre del Oro, and the Baroque style yellow and white Plaza del Toros de la Real Maestranza, which is Spain’s oldest bullring.

While you understandably may not want to watch a bullfight, the bullring and its associated museum are well worth a visit to understand more about Andalusian culture. Don’t miss a visit to the impressive semi-circular square of the Plaza del Cabildo and the Baroque Hospital de la Caridad, which today houses artworks by famous artists such as Valdés and Murillo.

Get more travel inspiration, tips and exclusive offers sent straight to your inbox with our weekly newsletter.

El Centro is the main bustling commercial center of Seville, just south of the Casco Antiguo or Old Town. It encompasses the streets between Puerta Real and the Puerta Osario, as well as the busy shopping streets of Calle Sierpes and Calle Tetuan that run down towards Plaza Nueva and the Plaza de San Francisco. At the northern end of El Centro, you’ll find a branch of Spain’s largest department store, El Corte Inglés, while Calle Sierpes and Calle Tetuan are home to several old traditional shops, selling everything from elegant lacy fans and classic hats to traditional flamenco dresses. There are also several worthwhile sights located here including the grand Ayuntamiento or Town Hall, one of the best examples of Plateresque architecture in Andalusia and the pinked-hued Iglesia Colegial del Divino Salvador, built on the site of an old Moorish mosque in the 17th century.

The district of Sur lies to the south and the east of the central historic area of the Casco Antiguo. In preparation for the 1929 Ibero-American Exposition, much of this area of the city was given a makeover and the landmark Plaza de España, along with the sprawling Parque de María Luisa, was built here. Today, this area is one of the most visited in the city with tourists flocking to admire this impressive colossal square with its Neo-Moorish pavilions, huge fountains, canal filled with boats and ornate ceramic-tiled benches. Next to this, the shady Parque de María Luisa is home to several attractions of its own, including the Museo de Artes y Costumbres Populares (Museum of Popular Arts and Traditions) and the Acuario de Seville (Seville Aquarium).

Both Sur and El Centro are the best neighborhoods for families because of their central locations and wealth of attractions, in addition to the fact they’re not as noisy at night as the areas within the Old Town.

The working-class neighborhood of Triana lies across the river from the main city and is connected to the center of Seville by the old Triana Bridge. It’s one of the most traditional neighborhoods in Seville and is home to the city’s historic tile workshops and potteries, several of which you can still visit today, including the Centro Cerámica Triana. Triana has its own style – it’s a neighborhood of artists, dancers and musicians and has more of a local feel than some of the central barrios. It’s also a great neighborhood to catch a flamenco show, with many flamenco tablaos, bars and theaters. One of the liveliest parts of Triana is Calle Betis, with its multi-colored facades overlooking the river. It’s particularly known for its nightlife but head further into the neighborhood if you’re looking for something more authentic.

The modern area of Los Remedios lies just south of Triana on the other side of the River Guadalquivir. It’s one of the city’s most important commercial areas and buzzes with people shopping, visiting businesses, and public institutions. For some downtime in Los Remedios, visit the verdant Parque de Los Príncipes with its large lake. As well as being a commercial area, it’s also home to several notable sights of interest to visitors, such as the grand 18th-century stone Antigua Fábrica de Tabacos (Tobacco Factory), which was the inspiration for Georges Bizet’s famous opera, Carmen. This is also where Seville’s most famous festival takes place – the Feria de Abril – a celebration of flamenco, horses and Andalusian culture.

The neighborhood of La Alameda marches to the beat of its own drum. Alternative and bohemian, this once no-go area is today one of the city’s hippest hangouts. Centered around the large plaza of the same name, it borders the district of La Macarena and the Guadalquivir River. Once one of the oldest public gardens in Europe, it’s decorated with two Roman columns topped with a statue of the mythological God Hercules. Today, this long thin square is known for its vibrant nightlife – particularly popular with Seville’s student and LGBTQI communities – and is surrounded by bars, live music clubs and international restaurants. It’s even said to be the place where Andalusian rock music was invented.

You might also like: How to explore Seville with kidsTop 20 free things to do in SevilleThe 9 best day trips from Seville

Make the most of your time in Spain with Lonely Planet’s range of travel guides and phrasebooks. Be the architect of your own trip as you discover the best things to do in Spain through insider tips, suggested itineraries and handy maps.