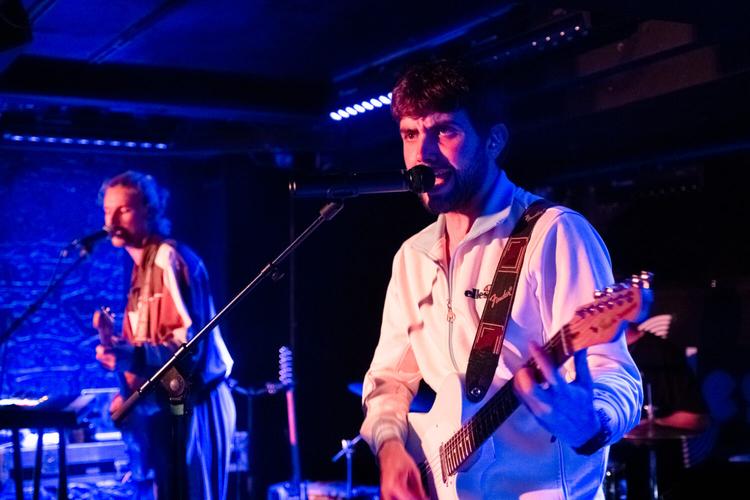 There’s only so much energy you can contain within a confined space such as the vaulted cellar room that is Moles in Bath before it all erupts into a joyously giddy mess. The combined admirers of Airways, Enter Red and Kudos were on average the tallest crowd I have encountered in a long time, as well as the bounciest, putting several devotees in genuine danger of pinging off the ceiling as well as the walls. Anyone in need of a shake-up, via serious sonic refreshment, was definitely in the right place in the presence of these three bands on Saturday night.

The support was well supported, in terms of generous attendance, attention and enthusiasm. Anyone that was here solely for the headliners came away with considerably more than they bargained for. Local four-piece, Kudos, have only just released their debut single, Far Away, but they impressed with their moody soup of genres. We had Radiohead vibes, shoegaze swirl and elements of Shame’s post-punk spikiness. Kudos’ music was pleasantly mercurial in terms of how you couldn’t quite pin it down. One minute you’d hear a Bloc Party-ish drum line and the next, you’d hear a proper, traditional ’70s/’80s rock guitar solo. Lead singer Tom rocked a bright orange boiler suit, more ‘hi-vis roadmender’ than ‘Guantanamo inmate’, and the rhythm section pulsated perfectly through the performance space, just as it would through a really good set of headphones.

I first saw the second support band, Enter Red several years ago when they were four sixth-form lads, playing a local outdoor summer one-dayer on a stage made by opening up one side of a lorry trailer. The rest of the bill was dominated by bloke bands doing covers. It all felt like a front for copious eating and drinking, until a quartet of upstarts hit the stage, played their own songs and significantly distracted people from their porky baps and real ale. Nothing had changed in the intervening time in how engaging they were, but they’ve certainly written some powerful songs and developed headliner attitude.

From the opening track, Pull Me Under, we were submerged and immersed. Tracks like De Novo, Pin Drops and Blossom Trees combined moments of delicacy with surges of power. If you listened to Enter Red while driving on a motorway, you’d undoubtedly end up getting done for speeding. Kyle Ashwood led the mayhem and took us further and further into the red, to the extent that we definitely needed a rest and some refuelling before the final act of the night. Imagine Fall Out Boy having a proper scrap with Nothing But Thieves (and winning after several rounds) and you’ve got the sound/feel of Enter Red.

Headliners, Airways were raucous to say the least. Last time I came across airways that loud, I endured my Dad snoring despite there being two walls in between him and me. In a similar vein to Enter Red, they launched straight in with Out Of Control (clue’s in the name on that one, really). By the time we reached the encore, they’d effectively rallied the crowd to consider concepts such as ‘control’ to be superfluous to requirements. Jamie Reynolds on bass, grinning from wall to wall and flailing around as much as anyone can whilst actually playing an instrument properly, embodied from the stage precisely what it felt like to be in the audience. Many tracks from their splendid recent album, Terrible Town (stand-outs being the title track and Me and My Brain) sat alongside earlier fan favourites, such as Alien and White Noise Boys. Alien, composed when each member of the band was refused a visa to attend SXSW in 2017, allowed members of the audience to vent about former global inconvenience, Donny Trumpton, giving front man Jake Daniels a chance to wish the same discomforts on current global inconvenience, Mr Poo Tin of Russia. 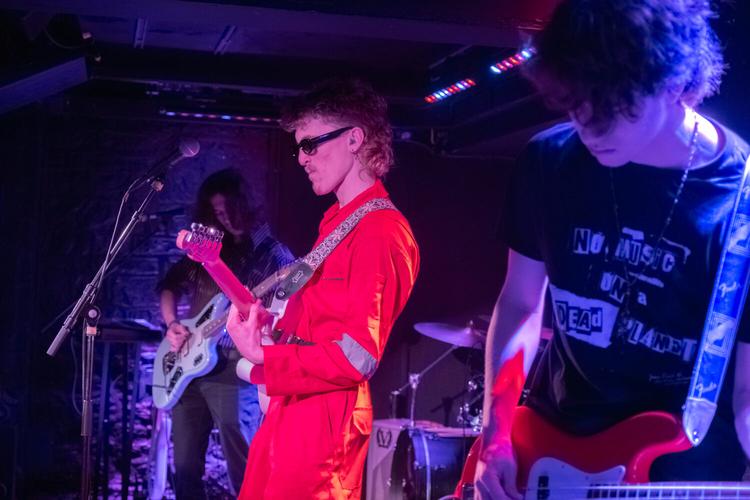 Alex Ruggiero’s sinister synths gave some Airways tracks an extra edge and additional layer of enticement, like the sound of Easy Life having a hard day. The tempo remained continuously high, with a weightiness that made them feel like an articulated Arctic Monkeys. By the time we hit the closing run of songs Rust, Mate and Reckless Tongue, the mosh pit was in full effect. Jake’s shout of “Everyone on the floor” not only turned everyone into coiled springs, waiting to jump back into action, but it also gave us the chance to appreciate the band’s fine sartorial choice of recreational sportswear, including Jake’s jaundice-yellow Ellesse time-tunnel tennis-tracksuit-top-and-shorts combo (and the whitest legs in the whole wide world).

When Jake returned to the stage after our call for an encore, he jested, “You left that a bit late – you had me sweating there.” With Airways’ playful gusto coupled with their thorough commitment to artificial fibres, plus Moles’ subterranean intensity, perspiration felt like somewhat of an inevitability – for them and for us.

All words by Jon Kean. More writing by Jon on Louder Than War can be found at his author’s archive. He tweets as @keanotherapy

Photos by Stephen F Evans. You can see more of his work on his website here and on Instagram here.