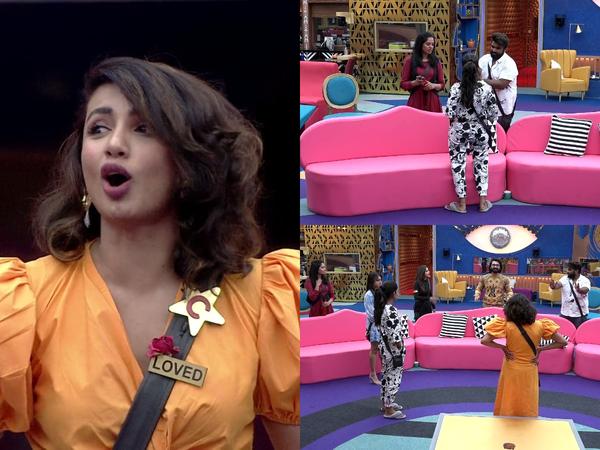 9.45 pm- “I love entertaining and exploring Bigg Boss,” said Chaitu, in a conversation with Ariyana. They also discussed Sunday’s episode and discussed about who Nagarjuna will scold for the behaviour of housemates. Then, Bigg Boss confirmed that Challengers won 1600 points in the luxury budget task. Ashu, Akhil and Ashu are seen having dinner

9.30 pm –During the discussion of their performance, Akhil confessed that he loves Ajay and Sravanthi. A few inmates are happy that challengers and warriors are equal. Shiva and Ariyana had a candid chat where he mentioned that she has a three-time Bigg Boss career (Season 4, Season 5 Buzz, and Non-Stop version). She funnily slapped Siva and left.

9.15 pm –Teju, Ariyana, Mithraw, and Sarayu spent some quality time in the garden area, discussing many random things. Natraj, Hamida and Sree Rapaka are asked to prepare the dinner. Sravanthi discussed about the performance of their skit with Ajay and Akhil. Bigg Boss sent shoes to Natraj master.

8.45 pm -Ajay stretched Ariyana’s body to help her relieve joint pains. Ashu Reddy shared that she did not expect Varsha Bollamma as a special guest in the house. “I was expecting someone from ex-inmates but it is refreshing to see new faces,” she said.

8.30 pm –Chaitu, Shiva and Bindu discuss that they got connected in one group. They are disappointed that there will be no challengers and warriors now. Bindu says she is still not getting a connect with a few housemates (in warriors). She further says to Shiva, ‘Imagine nuvvu, Natraj Master same group lo unte ela untundo tasks lo.’

8.15 pm –After tasks, housemates were given a treat from the guests. They are served with delicious food. Varsha and Raj are trying to crack PJs (Poor Jokes) with housemates, as a part of the theme of their movie. Varsha Bollamma declared that there will be no more divisions in the house as challengers and warriors. Bigg Boss announced that time has come for Varsha and Raj Tarun to leave the house. he housemates danced with Kumari 21 F song after that.

8.00 pm –After tasks, housemates were given a treat from the guests. They are served with delicious food. Varsha and Raj are trying to crack PJs (Poor Jokes) with housemates, as a part of the theme of their movie.

7.45 pm – Ariyana and Ashu have done a comedy skit like reel-life and real-life ‘Atha Kodallu’. Chaitu, Anil, and Shiva came up with another skit as a continuation to Ashu and Ariyana’s skit. Chaitu is the husband of Ashu. He drinks with his son Anil and friend Shiva at a bar. All of them get caught by cop Bindu in a drunk and drive test. Shiva again flirts with Bindu and generates good laughs. The next task is a conversation between the teacher and two students. Sravanthi, Akhil, and Ajay came forward to do the task.

7.30 pm – Housemates are performing comedy skits for the special guests. At first, Chaitu, Ashu, Ariyana and Teju performed a skit. Now, Shiva, Sree Rapaka and Natraj are doing a comedy skit. Shiva entertained with his funny dance moves. The third task us being performed by Sarayu, Siva and Chaitu.

7.15 pm – Raj Tarun and Varsha Bollamma are the surprise guests. They are here to promote their upcoming film Stand Up Rahul. Housemates are highly excited with the presence of these two young actors

7.00 pm – Housemates are waiting for the guest in the garden area. Teju is teaching dance steps to Chaitu. Bigg Boss asks housemates to shift Mahesh’s jail near the bathroom area. All the inmates are very excited about the incoming guest. Everyone is nervous to see the person. Meanwhile, ‘Meghalu Lekunna’ song has started and actress Varsha Bollamma has entered the house as a surprise guest. She has come inside along with a luggage trolley.

6.45 pm – Hamida and Sree Rapaka are making rotis in the kitchen. Hamida says someone should bring her a good marriage match after seeing her roti-making skills. Meanwhile, the housemates are arriving at the garden area one by one and are seated in the designated places. Akhil, Sravanthi and Ajay are putting extra efforts in rehearsing for the skit.

6.15 pm – The entire house is clueless about the entry of a surprise guest to the house. The inmates are prepared to impress the surprise guest with their skits.

6.00 pm – The housemates are having food. Sravanthi and Ariyana are at the dining table. Ariyana praises Akhil’s shirt.

5.45 pm – Ajay and Akhil are discussing about performing skits. Ashu Reddy and Ariyana are also preparing for skits which they will have to perform now. All other housemates are getting ready to perform the skits.

5.30 pm – Mahesh has been sent to prison. Since he is worst performer, he is put up in prison.

5.15 pm – Siva is having a discussion with Chaitu and Anil about the happenings in the house. They are discussing about the aspects that are related to the house. Anil and Chaitu are also equally engaged in the conversation.

5.00 pm – Ashu Reddy said that she is not going to forgive one person in the Bigg Boss house. She shared it with RJ Chaitu. Meanwhile, Bigg Boss switched on the evening lights, leaving everyone in a surprise.

4.45 pm – Bindu, Chaitu and Shiva are seen talking. Shiva says that he is Anchor Shiva, they are Bindu and Chatterbox Chaitu so they can call their group ABC. The housemates are thinking that Bigg Boss will send a prison for Mahesh.

4.30 pm – Mahesh says to Shiva that he should have raised his hands for small things else he will be given the harder chores like sweeping if he waited that long. Shravanthi says that Akhil is carrying things and Ashu says that she didn’t come here to make relationships and she has to deal with Akhil like a kid. Bigg Boss asked the housemates to stay in the bedroom for some time.

4.15 pm – Bigg Boss asked the inmates to restrict themselves to your bed room alone.

4.00 pm – Mahesh discussed about being the worst performer. He shared his views with Chaitu and Siva. Mahesh felt cheated. 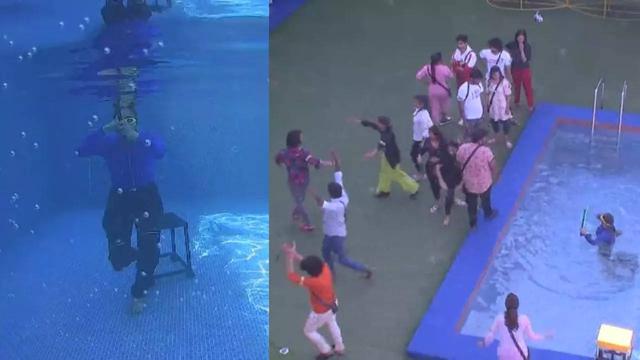 3.30 pm – The housemates picked Mahesh as the worst performer of the second week.

3.15 pm – Shiva picked Ariyana saying that she scolded him. He added that he got hurt when Ariyana called his behaviour worst.

2.30 pm – Bigg Boss asked the inmates to pick the worst performer of the house.

2.15 pm – The house unanimously picked Natraj Master as the best performer of the house.

2.00 pm – The discussion about the best performer is taking place in the house. Everyone is giving their opinion on the same.

1.30 pm – Bigg Boss asked all the housemates to come and sit on the sofa of the living room.

1.15 pm – Shiva is seen sweeping the floor. Teju remembers her school days and says that she didn’t change much from her school days. Hamida says that some are nominating her with very silly reasons. Teju says that it all depends on who wants to send whom out of the house.

1.00 pm – Tejaswi jokes about not being a captain. She said “nannu chudandi, entha ullasanga unnano entha utsahamga unnano”. Meanwhilw, Chaitu wanted to go washroom but it’s closed for cleaning. Ariyana is cooking and is having a conversation with captain Anil. Ashu told captain Anil that she’s not happy when people are disturbing her while doing something. Anil asked Siva to clean the bedroom as he is irritating Bindu and Sravanthi.

12.45 pm – While cleaning the dishes, Ashu and Ajay are seen washing the dishes. Shree also joined them and is seen helping them. Mithra is cleaning the bathrooms. Shiva is seen eating and helping Bindu in chopping the vegetables.

12.30 pm – The lunch preparations are currently underway. Siva and Bindu Madhavi are cutting the vegetables. Ashu Reddy and Ajay are washing the dishes. Sravanthi is helping with the cooking. Everyone is in a fun mood and there is no tension of eliminations currently. Meanwhile, Ashu asked for a new scrubber as there is only one in the house. She also felt that new captain Anil is making everyone work more in the house.

11.45 am – Akhil injured his leg during the task. The challengers win the luxury budget task. Ashu and Chaitu clean Akhil’s wound and help him.

11.30 am – Ashu goes into the confession room and comes out saying that the confession room is very fancy. She calls out everyone to read out the task. ‘Push It To Win It’ is the task given by Bigg Boss. Two contestants should sit on the cart and one from the teams have to push the carts to the other end. The first team to reach the opposite side will win. Anil is the sanchalak.

11.15 am – Teju, Nataraj and Ariyana talk about spiritual things. Teju says that her mother’s death taught her so many things in life. Nataraj says that his wife changed him into a normal person.

11.00 am – Nataraj prepared the breakfast for every one. Chaiti and Teju sing songs together. Chaitu says to Ariyana that it is not the right way to eat. Hamida and Bindu talks about the Morning activity and wishes that no one should fight during the task. Chaitu makes fun of Mithra and she also laughed. Mithra says that Bindu is a kind hearted person as she always gives her compliments.

10.30 am – Chaitu makes fun of Hamida doing makeup and she explains about her makeup products. Ariyana says that she wants to try something different in her makeup and Shiva flirts with her. Shiva says Ashu looks beautiful and Chaitu says Ariyana is looking beautiful.

10.15 am – Anil is seen helping Nataraj in cooking. Ajay tastes the icecream.

10.00 am – Anil asks Nataraj if he wants to continue as the ration manager this week as well. Nataraj accepts but Anil says he will decide acter discuss the same with the housemates. Together, both decided on the menu for the day.

The live updates of the reality show on Saturday are as follows:

Hi Welcome to the live coverage of Bigg Boss Nonstop which is successfully cruising on Disney+ Hotstar. We will be covering live the proceedings of today (Day #13).

Bigg Boss Non-Stop is the OTT version of the TV show that is currently streaming on Disney+ Hotstar. The popular reality show will be streaming non-stop for 24 hours without any interruption. The audience can watch the live on the Hotstar app whenever they want. Additionally, the organizers will also release a special episode of the TV show in the evening at 9 PM.