Home → Bathroom purchase → City to Country: What €550,000 buys across Munster

It's mostly just decoration and gardening that remains to be done by the purchasers of Maple Lodge, Meadowvale at Raheen in Limerick.

All the floors in the newly-built, contemporary four-bed bungalow are down and all the interior walls have been painted in a neutral shade of alabaster. The kitchen has been fitted with modern blue Corian-topped units as well as a stylish copper sink and integrated appliances.

The living area has been laid with herringbone flooring, the four bedrooms have been carpeted and the bathroom, the guest WC and the en suite have been tiled and finished. Outside the gardens have mostly been gravelled and the patio has been slabbed.

Quoting a guide of €595,000, Brenda Mulcahy of Sherry FitzGerald Limerick says the 1,970 sq ft, A2-rated property has been fitted out to an extremely high stand According to Ms Mulcahy, the key attraction for the high spec individually built detached home is its Raheen location.

“This is a highly sought after residential area, close to a selection of amenities,” she says, noting that it’s within easy reach of schools as well as Crescent Shopping Centre and Raheen Business Park.

Located off the Meadowlawn development, Maple Lodge is around 4.5 km from Limerick city centre.

Ms Mulcahy says trading up buyers both local and relocating ones have been looking at it.

“We are also getting downsizers because it is really hard to find a new bungalow in this area.’’

VERDICT: Should be amazing once the interior is decorated and the garden is planted.

THERE’S scenery aplenty to admire and ducks and wildlife to observe at Glenhouse in Kilmeaden, a beautifully extended and modernised farmhouse on an elevated wooded site overlooking the River Suir in east Waterford.

In addition to providing 2,700 sq ft of modern living space, the property offers seven acres of land with five outhouses including a barn and two stables as well as a stream, a waterfall and a pond. Regina Mangan of Liberty Blue auctioneers expects city viewers to be entranced by the wildlife.

“From the patio behind the house you can see the river, hear the waterfall and watch the ducks and herons in the pond, she says, adding that the owners regularly see pine martins, rabbits, foxes, mallard ducks and sika deer.

The owners, who have had it for 20 years, modernised the old farmhouse and built a new wing. Now offering three bedrooms and three bathrooms at ground floor level, it has a huge modern open plan kitchen /living /dining space with a large balcony on the upper floor. Also on the upstairs level is a large fourth bedroom which doubles as a home office/home cinema.

Situated at the edge of Portlaw Woods 6 km from Kilmeaden village, Glenhouse is 15km from Waterford city.

Quoting a guide of €575,000 Ms Mangan says the property offers families the opportunity to” live the rural dream” in a spectacularly scenic setting.

Viewers so far have included families from Waterford city as well as some from Dublin.

VERDICT: A contemporary home with land, space and views as well as quite a few extras.

THE extensively landscaped gardens at this detached four bed house near Skibbereen are soon set to erupt into a riot of colour.

Daffodils and crocuses are already popping up in flower beds of the 2003-built four-bed house at Coolnagarrane, one mile north east of the town. The property has a full acre of landscaped gardens with a range of features including gravelled areas, timber arches, patios, stone paths and a greenhouse as well as numerous raised beds.

Seeking offers of €550,000, auctioneer PatMaguire says this is a spacious and comfortable home with close to 2,000 sq ft of very well presented accommodation.

In addition to having a large sitting room, a generous sized kitchen-diner, a utilityand three en suite bedrooms, the property has both a sunroom and a garden room/ covered patio. Well-suited to a buyer thinking of working from home, it has a fourth bedroom/ study at ground level as well as a home office on the first floor.

Noting that there are two garages, including a lofted one, offering an additional 1,000 sq ft of space, Mr Maguire says a new owner could use one of these as a workshop or as a home office. Viewers who are already looking at it include young city couples as well as some UK buyers looking to relocate to West Cork, he adds.

VERDICT: A spacious home for a green-fingered buyer.

WHAT’S most immediately striking about No 7 Radharc an Locha at Ballyalla near Ennis is its large feature windows and its contemporary design.

An extremely sizablefive-bed house with over 3,000 sq ft of living space, it’s one of just nine similarly designed properties in a cul de sac located 4km outside Ennis. Guiding the 2004-built house at €525,000, Cormac O”Sullivan of DNG O’ Sullivan Hurley says that properties are rare to the market in this exclusive cul de sac which is situated around 150m from Ballyalla Lake. 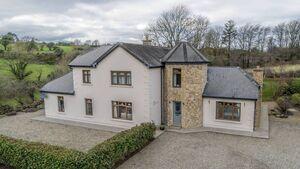 A stylish home with a high spec finish, it has maple flooring throughout the ground floor where rooms include a living room with a feature window, a sandstone fireplace and a vaulted ceiling with a galleried landing. There’s also a huge kitchen/dining/living space adjoining a sunroom as well as two ground floor bedrooms including one used as a gym. The first floor has an additional three bedrooms including an extra spacious one with an en suite and a dressing room.

In the grounds there’s a wrap-around driveway, a stone patio with a hot tub, a raised deck and a detached garage.

“It’s attracting a lot of interest and in less than two weeks bidding has gone above €600,000,’’ says Mr O’Sullivan explaining that the top two bidders include both a local family looking to trade up as well as a relocating buyer.

VERDICT: A stylish contemporary property with space to work, rest and play.