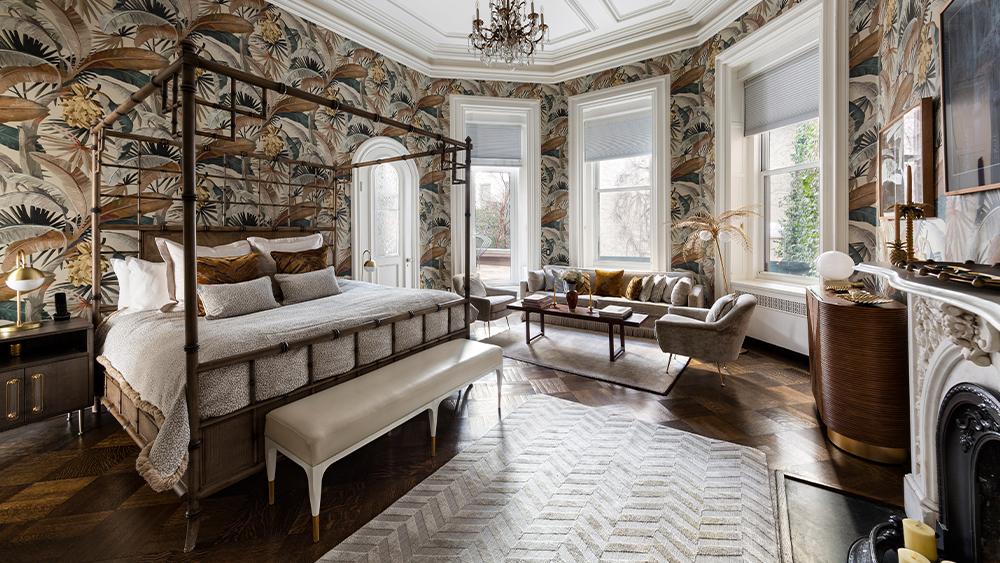 Home of the Week: Inside the $20 Million NYC Townhouse of Movie Power Couple Baz Luhrmann and Catherine Martin

Elvis was in the building. Well, a least on the top floor. It was here, in his fifth floor “creative studio”, that Oscar-winning writer and director Baz Luhrmann is said to have penned the script for his upcoming film Elvis, starring Tom Hanks.

It’s also Elvis who’s partly to blame for Luhrmann and his wife, four-time Oscar-winning set and costume designer Catherine Martin’s decision to put their beloved New York City townhouse on the market, with a $19.995 million asking price. Seems Covid travel restrictions in and out of the couple’s native Australia, where Elvis was filmed, have kept them away from NYC for the past couple of years, leaving the landmark property empty. Add to that, the couple’s two children are said to have reached college age, prompting the difficult decision to sell.

“Homes like this come along once in a lifetime,” Steve Gold, listing agent with the Corcoran Group tells Robb Report. “It is a true unicorn in terms of New York townhouses. Its proportions and grandeur are just exceptional.”

The exterior Nina Poon/MW Studio for The Corcoran Group

Luhrmann, who wrote and directed films like Moulin Rouge, The Great Gatsby and Romeo + Juliet, purchased this elegant Anglo-Italian brownstone back in 2017, paying a reported $13.5 million.

Built by a Brooklyn-based merchant in 1850, the home is unique in that its frontage spans 28 feet, making for exceptionally spacious rooms. Corcoran’s Gold says it’s a rarity among New York townhouses. The exterior design only adds to the grandeur, with its full-width second-floor Juliet balcony featuring a delicate, cast-iron railing, lovely arched windows and an imposing front entrance with arched stonework.

The living area Nina Poon/MW Studio for The Corcoran Group

Add to that the home’s tony location on East 17th Street overlooking Stuyvesant Square Park in Manhattan’s coveted Gramercy neighborhood, within strolling distance of bustling Union Square. “Stuyvesant Square is one of New York’s oldest parks, and the home faces it almost centerline. It’s also on the north side of the street so has a southern exposure. Almost all of the rooms are flooded with light,” says Gold.

After Luhrmann and Martin bought the home, the couple immediately jumped into a massive, top-to-bottom renovation, converting the former three-family home into a single residence. The complete makeover also reflected the couple’s passion for theatrical design. As featured in the pages of Elle Decor and Vogue Australia magazines, the multitude of rooms are decorated in rich colors and wild-patterned wall coverings, most designed by Martin. 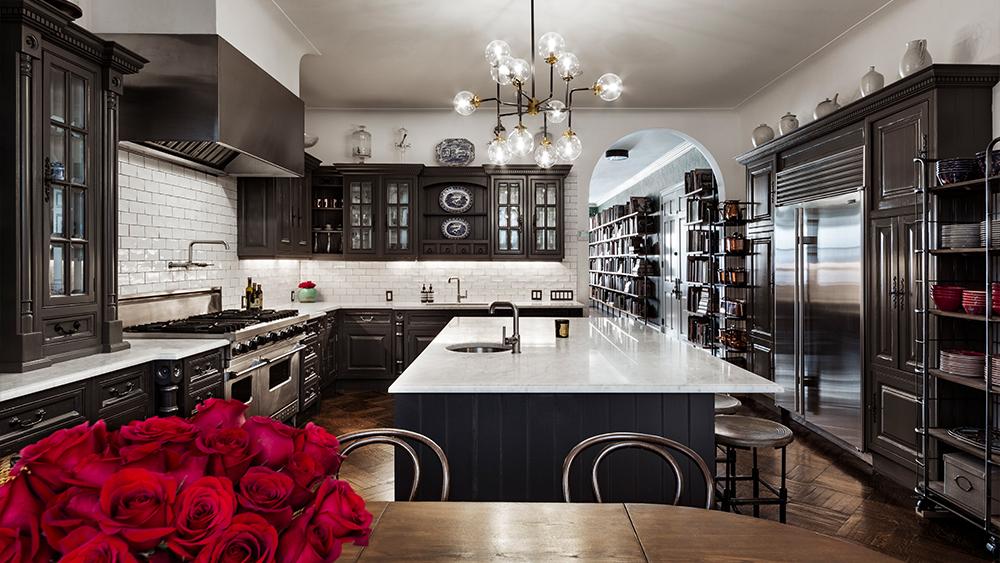 Spread across those five levels are six bedrooms, five baths and a couple of powder rooms. The highlight here is the second floor’s stark-white parlor, with its soaring 16-foot-high ceilings, floating curved staircase and floor-to-ceiling doors leading out onto the balcony. Through a high-arched door is the adjoining music room where, at least on the listing photos, the couple’s Oscars are lined-up on a shelf.

The decoration for the striking green and ruby red family-room-cum-dining room is said to have been inspired by the green tiles surrounding the original fireplace. That boldly patterned emerald wallpaper is also one of Martin’s own designs. The set designer’s theatrical decorating skills are also on show in the home’s entry hallway, with its blood-red carpeting, black paintwork and wild geometric wall covering.

The kitchen Nina Poon/MW Studio for The Corcoran Group

Take the stairs, or elevator (itself a work of art), down to the cellar level to find a media room with an overstuffed red velvet sofa, plus a studio that could be converted to another bedroom. From there there’s access to the home’s coveted, roughly 1,500-square-foot garden.

The master bedroom Nina Poon/MW Studio for The Corcoran Group

Way up on the fifth floor is Luhrmann’s space, which currently features a living room, bar, gym, bedroom and bathroom. For a number of years, the floor was home to renowned jazz tenor saxophonist Sandy Johnson and his wife.

“This entire top floor would make a perfect self-contained primary suite, replacing the current one on the second floor. The owners did have plans to add stairs up to the roof and create a private roof deck. The views from up would be incredible,” adds Gold.

Check out more photos of the townhouse below:

Another living area Nina Poon/MW Studio for The Corcoran Group

A bathroom Nina Poon/MW Studio for The Corcoran Group

The piano room Nina Poon/MW Studio for The Corcoran Group