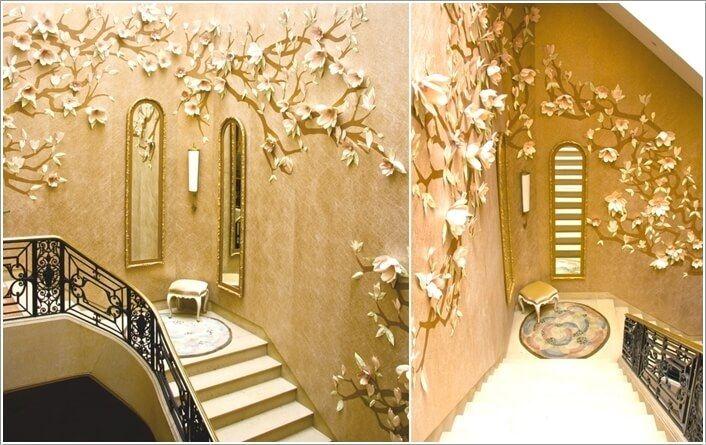 From the outside, Tilly Marchant’s home looks like any other regular three-bedroom suburban semi.

Step inside, however, and your senses are immediately assaulted by colourful, magical, film set-style interiors chiefly inspired by her kids’ fervent imaginations.

After nine years and eight different revamps, this 1950s house in Portsmouth remains an ever-evolving and colourful canvas for Tilly to showcase her bold and theatrical ideas which she says can be adopted by anyone for very little cost.

‘Our house is in the middle of a rough-ish area,’ says Tilly, ‘but you can create magic wherever you live.’

Her children’s bedrooms are the jewels in the crown, with nine-year-old Marla’s room forest themed, complete with real tree trunks, while Rigby, six, went for a jungle look with a treehouse-style bed. Both children look after their own plants which abound throughout.

‘I’m obsessed with kid’s rooms,’ says Tilly. ‘Growing up, I had free range to decorate my bedroom. First, it was an Indian boudoir, then I went for a sea theme and my parents let me do whatever I wanted because they also had a sense of adventure with interiors.

‘The kids and I revamped their bedrooms during the pandemic. We couldn’t go out so we decided to bring nature inside instead.

‘We discussed what we all missed most – Rigby missed holidays and Marla missed walking in the forest – then they drew out their ideas. Feeling like we were outside was key and my golden rule is if it works in nature, it will work in a room.’

The panels hide a handy storage area beneath the bed and an antique door was fitted to create a built-in wardrobe.

Tilly used limewash on the walls to age them, hiding imperfections at the same time, then spent three days painting clouds on the ceiling. ‘It was a killer on the neck – I felt so sorry for Michelangelo afterwards,’ she laughs.

The French sun-shape ceiling light was found on eBay while the dressing table came from a local antiques dealer. ‘I’ve got to know all the antique and junkyard dealers in the area and they know I’m always looking for a bargain or a freebie!’

The pièce de résistance, however, is the ash trees which Tilly screwed into place to create a woodland vibe. ‘Ash trees are like weeds, they grow back, so I cut these down at my parent’s nursery, which is covered in them.’

She aged the wooden staircase using an old sea chain, hammers, a blowtorch and different paint effects. A hammock sits underneath and the mural wallpaper is from Happywall.

‘Other parents say to me, my child has been to your house and they desperately want your kids’ bedrooms! I’d love to see people get more adventurous with children’s rooms, they so often get forgotten. I want Marla and Rigby to have amazing memories of growing up, lying in the hammock or tucked up in their hidden beds, because I have fabulous memories from my own childhood.’ 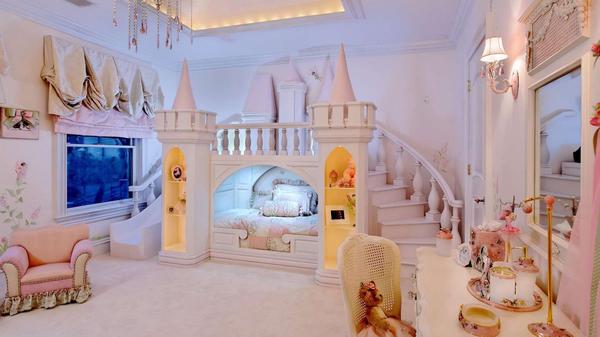 Tilly always starts each room with a theme in mind. ‘If I go on holiday and want to look like a rich Italian, I pack only the things a rich Italian would wear,’ reveals Tilly.

‘It’s the same with rooms. I map them out in my head and use colours that work well in nature. I love art and I’m a maximalist but you don’t have to study art to be creative. If you want to paint something, just do it!’

Tilly based her bedroom on ancient Japan, painting a flock of Japanese cranes flying overhead on the mustard walls and a stunning tiger and crane mural surrounded by black lacquered cabinetry which cleverly conceals her wardrobes.

‘The bed was given to me by a friend and I found the doors on eBay,’ she adds. ‘I also pick up stuff on the street that people have thrown out. I rescued an antique chest of drawers, some statues and old picture frames which look fab with new paintings inside.

‘I hunt at tips, too, and have found wicker furniture and cushions which I’ve recovered with Liberty offcuts. I love to see how cheaply I can renovate a room. My bedroom cost £350.’

Downstairs, Tilly transformed her once-characterless living room by uncovering an old brick fireplace, repointing it and limewashing the brickwork. She laid mosaic dragons on the hearth using broken tiles given to her by a local retailer.

The four period candle sconces were bought from eBay for £50 and she glued builder’s beading on the walls to create a character panelling effect. The ceiling was painted black to make the 1970s silver disco ball stand out.

Her kitchen was themed around the enormous antique ship refectory table and benches she bought for £250 from a French house clearance dealer and a castle style chandelier picked up for £100 on eBay.

She painted the walls and cabinetry the same shade of dark green to blend beautifully with the aged builder’s scaffold floorboards.

This moody and decadent theme extends to the bathroom, with Gothic black walls and ceiling framing a moonscape Tilly created using quick drying plaster painted over with waterproof gold paint.

The roll top bath was ex-display with plastic legs she replaced with metal ones and she painted the monochrome checkerboard tile effect on the floor. ‘It’s the most magical place to take a bath,’ she says.

Her thrifty ways are about more than just about saving money. ‘It’s not about the expense,’ she adds. ‘An antique or pre-loved piece of furniture is so much better made than new stuff – it’s already had a life and you get to keep it forever.’

Get in touch by emailing MetroLifestyleTeam@Metro.co.uk.

Not convinced? Find out more »