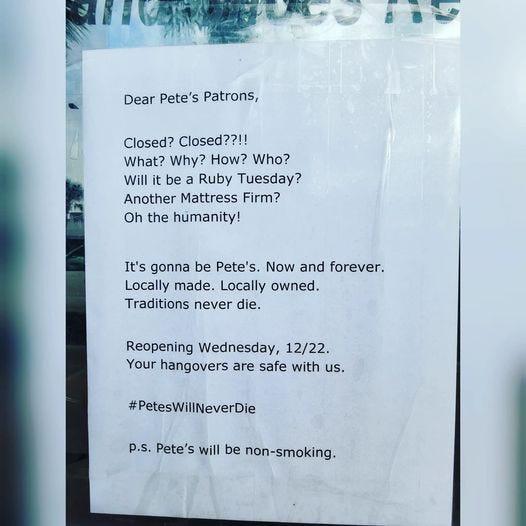 When prohibition ended in 1933, Pete’s Bar was the first location in Duval to get a liquor license, despite Pete Jensen selling bootleg liquor out of the grocery next door throughout the years alcohol was banned. For nearly nine decades, Pete’s remained in the Jensen Family and grew to be the go-to watering hole for many Jaxons, including myself.

Stepping through the doors of Pete’s Bar used to feel like walking directly into a piece of history. With Pete’s under new ownership, we’ll still be stepping into a piece of history, but now with a much more glum shot of reality; even the first and most beloved bar in Duval can fall victim to the apocalypse of beachside gentrification.

When news of the sale went public on Dec. 13, staff and patrons took to a Pete’s fan page on Instagram to voice their disapproval. By the looks of the comments, this news blindsided both the staff and community as a whole. At the time, most were under the assumption the sale (reported to be $8 million) meant the doors of Pete’s would be closing forever. Over the past few years, iconic beachside landmarks, like Freebird Live, have been bought up and transformed entirely, but new owner, Robert Tilka, claims that Pete’s will remain largely unchanged. 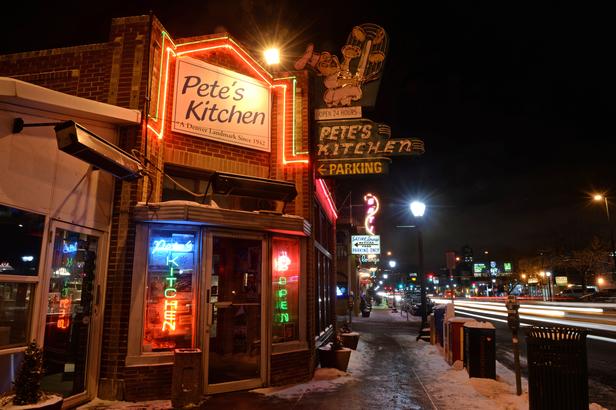 In itself that’s problematic as the sale is one of largest changes possible: a multi-generational business cut short by wealthy people’s ability to offer a price impossible to pass up. Initially, Tilka plans to ban smoking to create a more friendly and inviting environment in order to get more people in the door and boost profits. He also claims that drink prices will stay the same and pool tables will still be a quarter, but we’ll see how this plays out as there are already rumors of implementing a new outdoor smoking patio. This alone alludes to the idea that bigger changes are on the horizon, but we must wait to find out.

Is it even Pete’s anymore if it’s no longer in Pete’s family? Is Pete’s worth supporting anymore if the money I spend there is just padding the pockets of someone already profiting off the gentrification of other historic landmarks? My personal draw to Pete’s was its legacy and independence and the independence of those choosing Pete’s over big corpo bars like Surfer, also owned by Tilka.

On Pete’s website, under the biography of one of the previous owners, Nancy Jensen, it states the secret to Pete’s long term success was never changing anything. Small changes occurred over the years like adding more ventilation to accommodate indoor smoking, but the space has largely stayed the same.

Tilka, a Florida native with extensive experience locally, like 16 years with the Jacksonville Jaguars, will, in essence, keep Pete’s “locally owned.” But the fact that Tilka has ties with many of the beach’s best bars like Mango’s, Surfer and Shim Sham Room and owns the oldest bar in St Augustine, Scarlett O’Hara’s, which he purchased in 2015, has some locals questioning his true motives. This snatch-and-grab for the top bar locations around the area feels less like Tilka is trying to preserve local history and more like a power play by someone looking for the seat at the head of the table.

After a nine-day hiatus, Pete’s planned to open back up to the public on Dec. 22 after a few “small renovations” like bathroom upgrades and a few new bar tops to increase server efficiency, but as I write this there has been no word from new management as to whether they’ll follow through with that promise.