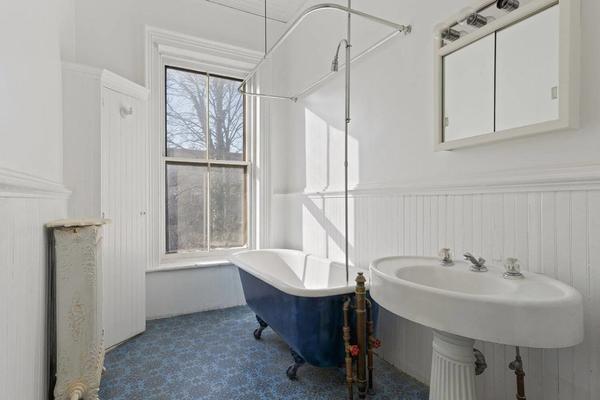 The Prospect Lefferts Gardens Historic District is known for elegant late 19th and early 20th century row houses, so this thoughtfully designed mid century modern house is unexpected but contains some prime details of the era. The standalone house made of brick at 110 Maple Street fits in well with the other large, freestanding houses on the block and has intact period kitchen cabinets and baths, a generous yard and a detached garage.

Custom designed by architect Maxfield Blaufeux for Dr. Stanley and Shirley Stark, it was completed in 1952. The original certificate of occupancy shows the house was constructed with medical offices in the basement for Dr. Stark’s practice. Stark was the son of Abe Stark, who was photographed celebrating his election win as City Council President in the house in 1953.

The Starks sold the house in 1968 and it has been owned by only one other family since then. Perhaps for that reason it has plenty of original details, including the basement medical office with darkroom and exam rooms. While a new owner might want to reconfigure the lower level (the listing includes a suggested floor plan with sauna and wet bar), even without any changes the upper floors are gracious, with generous living, dining and kitchen spaces on the main level and four bedrooms and two bathrooms above.

Save this listing on Brownstoner Real Estate to get price, availability and open house updates as they happen >> 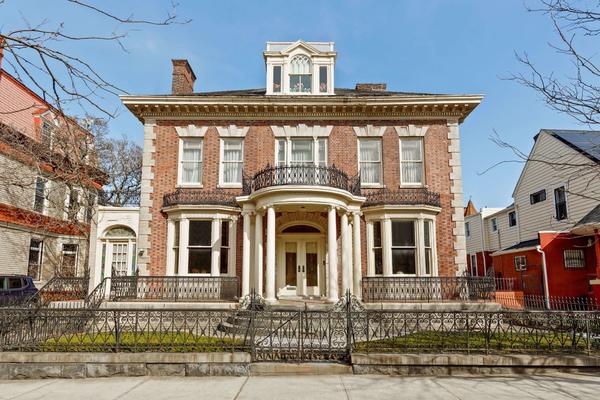 While the listing includes virtually staged images, the as-is photos show some of the details, including a paneled library with built-in bookshelves and a linoleum floor with a decorative pattern. The living room has a bay window facing the sidewalk. Since the house is detached with yard on all sides, it benefits from windows on all exposures. The dining room at the rear of the house has built-ins and two doors leading to a porch with room for outdoor dining.

There is plenty of mid century style in the kitchen, which has its original red laminate counters and wood cabinets with scalloped trim, venting at the kitchen sink and curved knick-knack shelves. The cabinets also sport knobs that are reminiscent of the ones found in the dazzling kitchen at the Louis Armstrong House in Queens. In the case of the Armstrong kitchen, those were provided by William Hurath Co. Some vintage-inspired appliances and a linoleum floor would send the room right back to the 1950s. A pass-through connects the kitchen with the adjacent breakfast room.

All of the bedrooms have two exposures and one has access to a front terrace that tops the bay of the living room. The Jack and Jill bathroom has brilliant turquoise tiles and twin sinks. Another bedroom has a dressing room and an en suite bath that is a prime example of a 1950s pink bathroom, with the color splashed from floor to ceiling. A thin black and pink tile border near the ceiling provides a bit of contrast.

The landscaping includes some very period-appropriate shrubbery, and one of the virtually staged images shows a large tree in the rear yard along with a brick wall. The lot is unusually large at 80 by 100 feet.

Next door is a 1952 row of three spec houses on smaller lots — apparently, like No. 110, built as infill on as yet undeveloped land, an old map shows. The rest of the block is a mix of earlier houses in colonial, medieval and Mediterranean revival styles, as the designation report details.

Michael Murphy and Shelley Wasserman of Compass have the listing, and the house is priced at $2.895 million. What do you think?

Brooklyn in Your Inbox