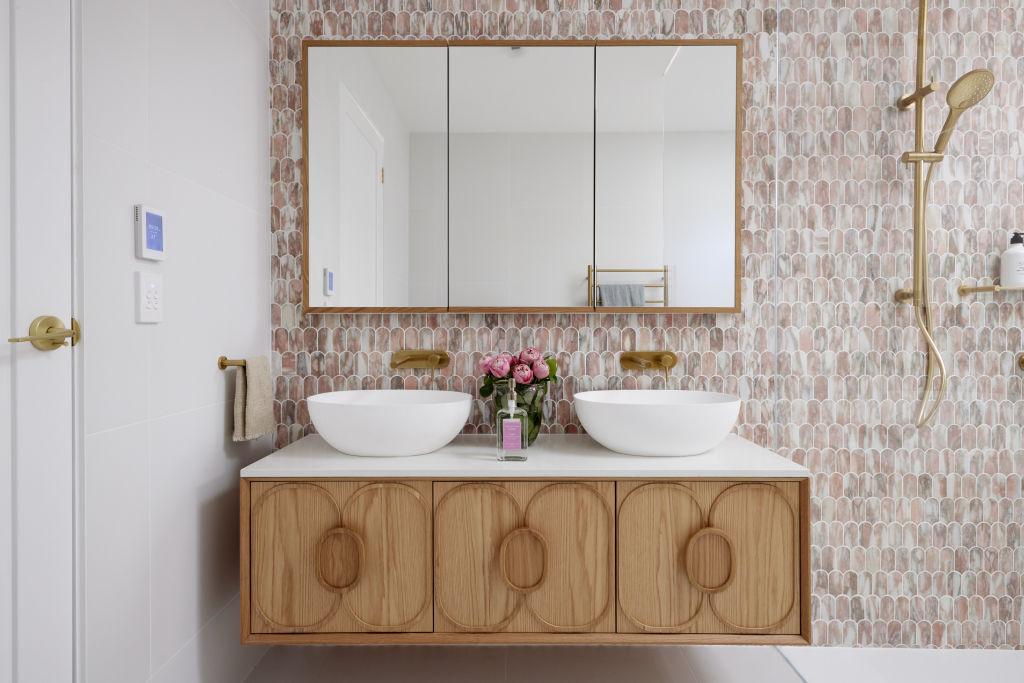 The judges are hiding in Scotty’s Beach Bar, so the contestants, unaware they’re there, don’t hold back in response to the comments.

First though, the bathrooms need to be completed. Ronnie and Georgia are just waiting on the plumbers and electricians to come in, and Mitch and Mark have a last-minute basin issue to fix.

There’s more to do in the Fans houses though. Josh and Luke have tiling, Venetian plastering, corking and more, but their focus right now is on getting a 155kg glass shower screen installed without breaking it. Fortunately, it goes in without a hitch.

Once that’s done, Josh and Luke research styling. Last week they had Mitch and Mark’s help, but this time they’ve turned to YouTube, which should go down well with the judges. Not.

Vito is in a better mood than he was earlier this week and raring to complete his and Tanya‘s bathroom. And Kirsty and Jesse just have to get their plumbing and electricity set up.

With the bathrooms complete it’s time to down tools and head to Block HQ for the judges’ feedback, where Shaynna, Darren and Neale are hiding…

The pair are nervous about judging after Mitch and Mark’s tough feedback the week before, but they needn’t have worried.

Once again Shaynna is wowed by the high ceiling and the thought of bathing underneath the skylight. She then turns her attention to the incredible tiling job, especially the porcelain feature tile and the small finger tiles.

Shaynna does, however, criticise the tap placement, which is quite far from the shower head.

“To actually turn it on you’ve got to be over there, you have less control of it. It’s good to have the controls near where the hand shower is,” she points out.

For Darren the neutral, “calming” colour palette means the bathroom is very contemporary.

“The execution and the delivery, it’s been done to such a fine degree, that I think it goes into luxe — even though it’s very simple,” Neale adds.

The couple weren’t happy with the judges’ critique of their guest bedroom so they aren’t sure how their bathroom is going to go down.

But it’s all positive, as the judges are smiling from the instant they walk into the bathroom.

The Norwegian Rose arched fan feature tiles have the wow factor Mitch hoped they’d have. Shaynna loves how the arched shape of the tiles complements the design of the vanity.

Darren likes the tiles too, as well as the room’s layout, which he thinks is better than Ronnie and Georgia’s.

Ultimately, what really strikes the judges is how the bathroom, particularly the feature wall, shows Mitch and Mark’s design personality. It’s a step in the right direction after their pared back guest bedroom.

“And I think that’s what we were missing last week… It felt like we had lots of measured impact and no punch. This is punchy as hell,” Darren says.

Neale adds, “I do feel like Mitch and Mark are back in the game. And this week I feel I’m seeing some of that old spark…” 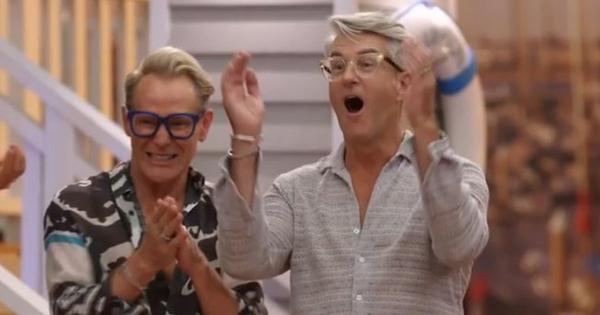 Renovating a Block bathroom almost ‘broke’ Vito, but he and Tanya pulled through to deliver a finished space.

The judges first pick up on the bold colours of the bathroom; it shows Tanya and Vito have personality.

“They’ve learned how to harness it, and how to show it and reveal it,” Neale says.

Highlights for the judges include the terrazzo floor, hand pressed tiles and the salmon colour basins complemented by a chocolate brown vanity.

The judges are confused by the huge size of the bathroom, which doesn’t have a toilet, yet has a shower big enough for three adults to fit in together.

There are little things that annoy the judges too. Hooks for towels instead of a rail, an oak surround on the power points, black trim around the white door and black wall sconces. But overall they find a lot to like.

The twins hope their Venetian plaster feature wall and ceiling will make a big impact, and it does — in the wrong way.

For the judges, spending lots of money on a ceiling effect doesn’t make sense as it would be unlikely to entice a buyer to choose that bathroom over another house’s.

And unlike the other teams so far, every negative comment from Shaynna, Darren and Neale gets a rebuttal from Josh and Luke.

“I can see where he’s coming from, but it’s just a bit different and we liked it,” Josh says.

What Darren thinks is a masculine and moody style, Neale calls “incredibly dated”.

“You say ‘masculine’, I say ‘cold’. I feel like I never want to see this grey, grey, grey palette again in a bathroom,” Neale says, adding that he’s seen it all before. Could he be referring to Jesse and Mel’s guest en suite from 2019?

Even the YouTube-inspired styling gets a bad wrap. “To think you could do that kind of chocolate with a block of cheese with a book next to it that says ‘Beauty’, and then a candle, and then you pick the towels that match the artwork, and then you roll them on the bench because you think you’ve seen it in a photo shoot…” Shaynna wonders.

“I’ve gotta say, take it on the chin, your styling’s atrocious.”

Josh and Luke admit the feedback hit them hard.

“They say judging’s not personal but when you’re living it 24/7 it’s personal and it hurts. It bloody hurts,” Josh says. “It’s not nice to cop it.”

House 5’s first bathroom on The Block is a guest en suite, so the small size compared to the other bathrooms is obvious to the judges. But they think it has all the essentials.

“In terms of utility for one bedroom you’ve got everything you need. It’s got the right size vanity, it’s got lots of space, love the basin — that’s beautiful,” Darren says.

Shaynna loves the blue basin and coloured tiles, but wonders why there is a nib wall on the shower.

“If you have a shower there, you’re not going to be watching someone go to the toilet. And to me it boxes this room and doesn’t make it feel as big as it should. They really should have made that all glass,” she explains.

The other issue is styling.

“Their advice is to go more ‘luxury beach house’ rather than ‘coastal theme park’,” Scotty says.

Overall the judges are happy with the space, which means Kirsty and Jesse are just left wondering what ‘kitsch’ means.

Back at Block HQ it was time for Scotty to add up the scores.

Mitch and Mark appear teary as they take out the win for a room that signals their comeback as design kings in the competition.

There’s one last surprise as Scotty opens his beach bar to reveal Shaynna, Darren and Neale have been sitting there all along.

Most contestants cheer, but Josh and Luke go bright red despite claiming they don’t care if the judges heard what they said.

Josh and Luke confront the judges about the harsh feedback, but they stand firm on their critique.

“I want you all to hear it, but specifically you guys,” Darren says, mostly aimed at the twins. “We don’t tell you this stuff to be mean. We are telling you what we truly believe will help you make your houses better and more saleable so you’ll do better.”

This article was originally published by Nine.com.au. Reproduced with permission.