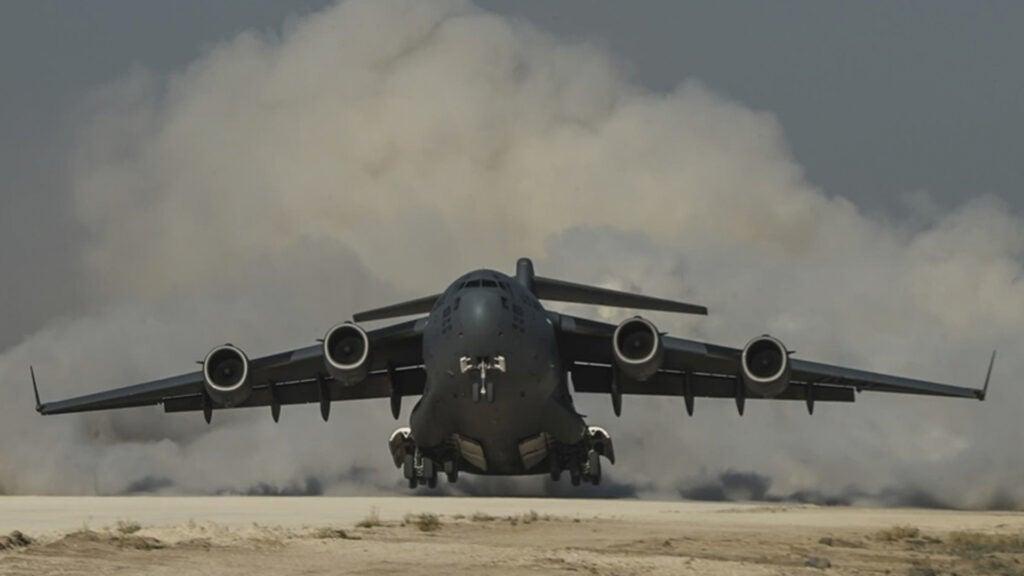 “Usually when something goes wrong, there’ll be a C-17 flying there."

With the U.S. trying to airlift 9,000 people a day out of Afghanistan, the military is working overtime to ferry troops, refugees and supplies in and out of the crisis zone. But one platform that’s been getting much more attention than usual lately is the Air Force C-17 Globemaster III, the 30-year-old cargo jet that can do anything from drop paratroopers to carry a 69-ton M1 Abrams Battle Tank.

Starting on Sunday, the “Moose” as the C-17 community calls it, began making headlines. It started with heartbreaking images of Afghan civilians clinging to the jets as they left Kabul. Still, one brave crew managed to lift 640 people out of the besieged city in one flight. As tough as some of the stories and images are, these are the challenging situations that “Moose drivers” spend their careers preparing for.

“It’s pretty unbelievable. No one expected Afghanistan to fall as quickly as it did,” one C-17 pilot told Task & Purpose. The pilot spoke on the condition of anonymity because he was not authorized to talk to the media. “But I would say everyone’s in the strangest way excited because this is where we excel.”

C-17s are by nature heavy lifters, the pilot said. They can move about 85 tons — or 170,000 pounds — of equipment, which is just what you need to get a lot of people the hell out of Dodge fast.

“Everything that’s being asked of the Globemaster community, you know, this is what we train for,” he said. “This is what we live for.”

It’s hard to overstate what C-17s and their crews are capable of. The plane’s high wings, slats and externally blown flaps give it the necessary lift to take off and land on short stretches of runway, and the thrust reversers on its engines let it maneuver easily on narrow, unpaved airstrips around the world. And since it can refuel in the air, the Moose can get anywhere the Air Force orders it to go. That includes disaster zones resulting from typhoons, hurricanes, earthquakes and countless other crises.

“I don’t think there’s ever been a better military cargo aircraft design,” the pilot said.

Even so, he couldn’t help but be impressed by the sheer guts of the crew that took off from Kabul with 640 people in its cargo hold. In normal situations, the jets carry 102 people, at least if everyone wants a seat off the floor. But in tight spots like present-day Kabul, the plane can floor load up to 400 people sitting cross-legged on the deck. Obviously, the crew of Reach 871, the call sign for the 640-passenger C-17, flight pushed that envelope a bit further. For scale, the last time a C-17 carried so many passengers (at least that we know of) was in 2013, when a Moose flew 670 people out of the Philippines after a typhoon hit the island nation.

“I hope they’re recognized for it, because that’s a gutsy call, and they made the right one,” the anonymous pilot said. “They didn’t know at take-off how many people they had on board, and then they did a count and they got 640, which is just an incredible amount of people to have on a jet.”

Of course, there were still hundreds of people outside the C-17 and on the runway, which is an awful spot to be in as an aviator. But at some point you just can’t fit any more people on board.

“My heart breaks for that crew,” the pilot said. “If there was a way to get those people out of there, they would have done it.”

The pilot likened the scene to that of the Titanic, the massive ocean liner which sank in the North Atlantic in 1912: Everybody onboard wanted to try to get on to the lifeboats, but if too many did so, the lifeboats would sink.

“If the C-17 stopped, they might have torn it apart, or they might have had weapons or grenades,” the pilot said. “And if the C-17 couldn’t take off or was damaged, then it would have blocked the runway, and then nobody gets out.” 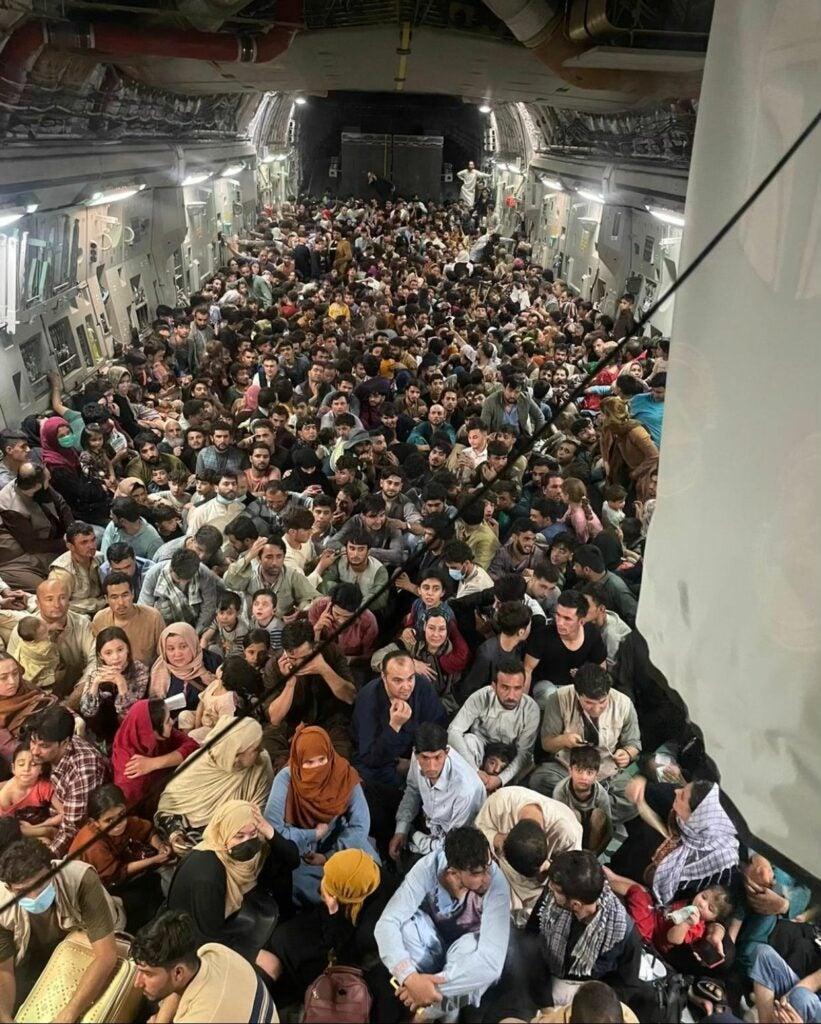 Moose crews train for hijackings, forced entries and perimeter breaches, but never on the scale seen in Kabul on Sunday, the pilot said. The pilots did the exact right thing by taking off, he said, but the trouble wasn’t over when the ramp closed.

Without knowing how much weight was in the back, the crew likely did not know exactly how much runway the plane needed to take off, the pilot said. Making things worse, Kabul is at an altitude of about 5,900 feet, where the air is thin and therefore there is less of it around to generate lift below the plane’s wings. Plus, it’s the summer, so the air is even less dense because it’s hot out.

“The higher you go and the hotter it gets, then yeah it cuts into your lift capability,” the pilot said.

Two more factors made the flight even more perilous. First, the pilot explained that Kabul is located in a bowl-like valley surrounded by mountains, so the need for lift is even more urgent because otherwise, those mountains will get very personal very quickly. Second, the nearby city of Kabul was overrun with Taliban fighters. While the Taliban have ended hostilities with the U.S, there was still small arms fire going off in the city, and it was impossible to know whether some of that might go in the C-17’s direction.

“It’s really hard to hit an aircraft with a pistol or a rifle, but there’s also the constant threat of shoulder-mounted [man portable air-defense systems] as well,” the pilot said. “It could be our own weapons that we gave the Afghan National Army that are now used to shoot at our aircraft. The whole thing’s just a terrible situation.”

Even if the jet gets off the runway, past the gunfire and over the mountains, there’s still another challenge aboard the aircraft: which is the fact there are hundreds of people on board and only one toilet.

“One bathroom for 600 people is not an ideal situation,” the pilot said. “Certainly that jet’s probably down for a while getting cleaned [after the flight] because some people are just going to have to use the bathroom on the floor. That unfortunately happens in humanitarian lifts.”

It’s hard to imagine flying into and out of a situation like that on a daily basis, but when the call went out for C-17 pilots to fly to Afghanistan, it was easy for the Air Force to find volunteers, the pilot said. Though he did not have specific numbers, the pilot said there were more people signing up to fly the missions than the Air Force had airplanes available.

“It’s in the same vein as firefighters when people see a burning building,” he said. “It’s our job to suit up, take care of business and help the situation.”

The pilots should have plenty of work to go around. The Department of Defense announced on Tuesday that the U.S. could airlift between 5,000 and 9,000 people out of Kabul every day. “Could” is not the same as “will” or “plans to,” but if it gets anywhere near that number, the U.S. will need plenty of transport planes on hand to get it done.

“The Air Force is going to push for 22 planes a day through there, which is a lot of airlift,” the pilot said. “I will say, as a community, this is probably the biggest operation that we’ve done.”

It’s actually the second-biggest. On Wednesday, Army Gen. Mark Milley, the chairman of the Joint Chiefs of Staff, told reporters that the Afghanistan airlift will “probably be the second largest NEO [noncombatant evacuation operation] conducted by the United States,” he said. Though he did not specify which was the largest, U.S. Naval Institute News said on Tuesday that the largest NEO occurred in 1991, when more than 20,000 American service members and their families had to be evacuated from Subic Bay Naval Base, Cubi Point Naval Air Station and Clark Air Base after the volcano Mount Pinatubo erupted in the Philippines.

With 15 years of experience flying the Moose, the pilot has done everything from combat airdrops in Afghanistan to resupply drops in “shitty situations all around the world,” he said.

“Usually when something goes wrong, there’ll be a C-17 flying there,” he added. “So in a weird way, disasters are our specialty.”

When asked about how he psyches himself up for something like Kabul, a situation so dire all the world is watching, the pilot cited a line from the famous children’s show Mister Rogers’ Neighborhood.

“He’s got a great quote about ‘look for the helpers,’” the pilot said. “That’s basically who we are, man. We’re the helpers.”

Want to write for Task & Purpose? Learn more here and be sure to check out more great stories on our homepage.

David covers the Air Force, Space Force and anything Star Wars-related. He joined Task & Purpose in 2019, after covering local news in Maine and FDA policy in Washington D.C. David loves hearing the stories of individual airmen and their families and sharing the human side of America’s most tech-heavy military branch. Contact the author here.