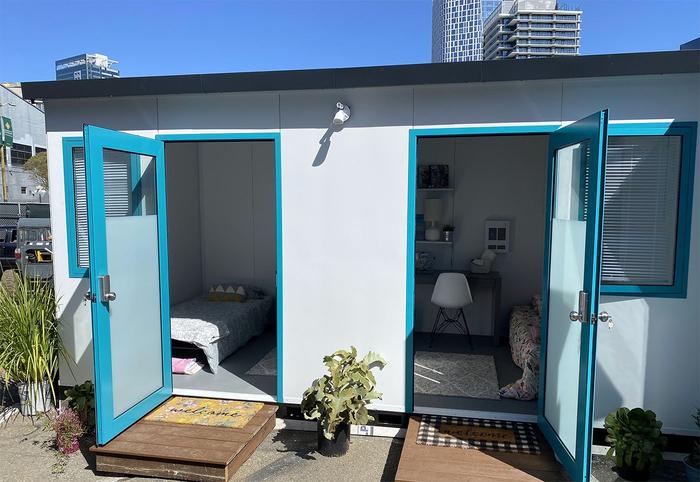 San Francisco's first tiny-home village for the homeless, a pilot project using prefab tiny houses, has just welcomed its first dozen residents at the foot of Gough Street, on a lot owned by a developer waiting for construction permits to build a condo tower.

The site has for many months been home to a city-sanctioned "Safe Sleeping Village" with tents — not the most luxurious spaces, but with on-site bathrooms, meals, and security, better than a random sidewalk. As has been widely publicized, servicing these tent villages has been costing the city's Department of Homelessness and Supportive Housing $60K per tent per year, or $5,000 a month — a fairly insane sum given that you could rent a market-rate two-bedroom apartment for that price.

Back in September we learned that the tent village at 33 Gough Street was becoming a tiny-house village instead, an upgrade for sure though still not permanent housing and not all that luxurious. But as the Chronicle reports, the prefab, duplex tiny houses each have a twin bed, electricity, a heater, and a door that locks from the inside — with a combination lock on the outside. And these are luxuries enough for everyone who has spent the last year — or many years — in a tent or other makeshift abode.

Each tiny house has also been decked out with bedspreads, chairs, pillows, and welcome mats, courtesy of volunteers and a corporate partner, Living Spaces.

This temporary tiny-house village is the work of a pandemic-born nonprofit called DignityMoves, which has raised $2 million for the construction of 70 tiny homes on this site. As of this week, 12 are complete and people are moving in, but all 70 will be occupied sometime this spring. 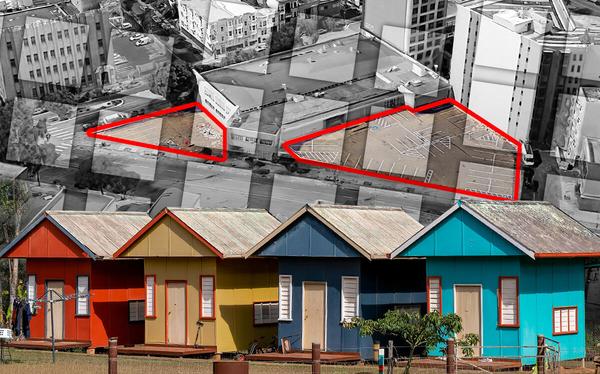 San Francisco pilot project is coming along! First units will be ready for move-in next week pic.twitter.com/OztS61eCwp

DignityMoves 33 Gough Street is ready for its first guests! 70 rooms for people experiencing homelessness. Most importantly everyone gets their own room with a door that locks. One more tool in the toolkit for addressing the homelessness crisis. pic.twitter.com/zKmhNwgyP5

DignityMoves calls these modular, movable structures "one more tool in the toolkit for addressing the homelessness crisis." And they are seen as temporary stopovers for people seeking more permanent housing. Ultimately, this site will have to be emptied out and these tiny homes moved elsewhere, whenever that developer is ready to break ground.

"It’s definitely a lot warmer, and I don’t have to worry about my stuff being taken," says recently moved-in resident Ryan "Nobody" Bauer, who tells the Chronicle he's been on the streets for 30 years. "I haven’t had a locked area where I could leave my stuff and not have it stolen for who knows how long."

Like the city's sanctioned tent villages, this one will be managed by the nonprofit Urban Alchemy, which will provide 24-hour security. And the nonprofit Mother Brown will be providing three meals a day at two on-site dining halls, which will be paid for by the city.

Construction for the units, along with landscaping, storage units, the kitchen and dining halls, breaks down to about $30,000 per unit, according to the Chronicle. But if the tent sites were costing $5,000 per month per tent to maintain — with security, maintenance, and meals provided — then presumably these units will come with a similar price tag. It's not clear how much of that is being covered by DignityMoves, or by the nonprofit Tipping Point Community — whose founder, Daniel Lurie, announced an ambitious plan in 2017 to raise $100 million to address SF's homelessness problem. Tipping Point says on its website that it has helped 525 individuals exit homelessness in the last five years, and it is also reportedly providing some funding for this tiny home village.

A similar project that includes space for 79 people in tiny homes recently went up on the shores of Lake Merritt in Oakland. That project used prefab, modular tiny houses from a startup called Pallet, but DignityMoves has partnered with design firm Gensler on its own versions, which are each 64 square feet and sit on steel-frame foundations.

Next up, DignityMoves is opening similar tiny-house villages in Santa Barbara, and in Rohnert Park.

Previously: Tiny Homes for the Homeless Coming to Lots at Gough and Mission