Home → Bathroom purchase → You're onto a winner if you can pony up for The Stables, a €460,000 Ballincollig home 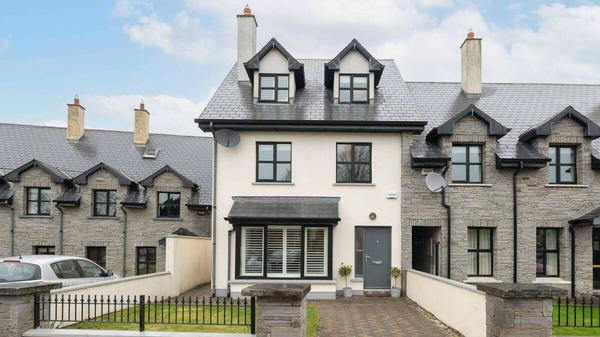 You're onto a winner if you can pony up for The Stables, a €460,000 Ballincollig home

THERE was no mucking about with the extension of No 13 The Stables where a new and improved downstairs layout transformed the everyday environment.

A nice house to begin with, it was elevated considerably by the creation of a new kitchen, the upshot of which was a far more practical family living space.

Commendably well presented,No 13 is part of a niche development of around 20 houses, built on what was once the stableyard of a large house in Ballincollig.

Known as Coolroe House, it was home for many years to the Tanner family and rented out at one point to the nephew of the fourth president of Ireland, Erskin Childers.

The Stables' history is a lot more recent than that of Coolroe House - it’s a 21st century development, a mix of house sizes and types, including apartments, townhouses and semis, spread out in a sort of distorted horseshoe.

No 13 is a semi, spread over three levels, with the rear extension added four years ago. That extension went mainly outward, but also slightly up, raising the ceiling into a curved vault, with two strategically placed veluxes to enhance the natural light. They do the job nicely, along with three other kitchen windows and a set of patio doors.

Selling No 13 is Norma Healy of Sherry FitzGerald and she says the owners have done an “exquisite job” on the décor (lots of Farrow and Ball on the walls and lots of Laura Ashley furnishings). The kitchen units are crisp and contemporary and an island unit creates extra storage and seating. Open to the kitchen is the dining area, the two linked by an arch which marks where the original wall was, before the extension.

To the front of the property is a living room, with open fireplace and bespoke plantation shutters.

A guest WC and a utility room off the kitchen round out the ground floor.

There’s a trio of bedrooms on the first floor, of which the biggest is an ensuite double. A smaller bedroom is the perfect nursery. 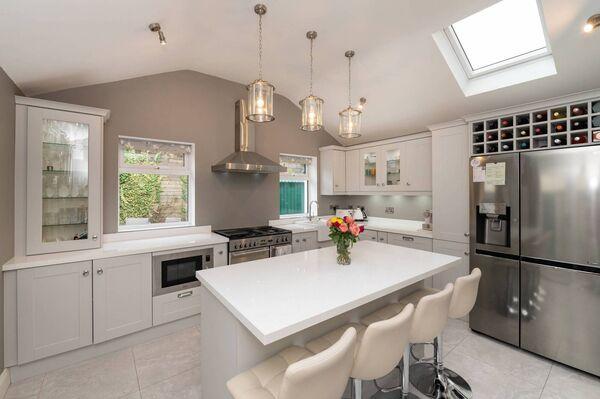 As there are five bedrooms in all, springing a home office should not be a problem. The main bathroom is also on the first floor.

The generous main bedroom is on the top floor and runs from front to back (a depth of 24’8”), taking up the bulk of the space.

It has both a dressing area and an ensuite. There’s a second bedroom at this level too.

After putting so much work into No 13, why sell up? The couple who extended it are relocating across the county bounds - from whence one of them came, Ms Healy says.

She is expecting a wide range of interest in this B-rated, 1,776 sq ft home, which she describes as "elegant and modern" and “impressive both internally and externally”.

While the guide price is €460,000 and may not immediately seem within the reach of first time buyers, Ms Healy is expecting strong interest from this quarter.

“The first time buyer profile has changed and what I am seeing right now is that they are older, people in their 30s, who have money," she says.

She adds that No 13 may also attract investors as "this kind of property generates rent of about €2,500 per month”.

Of five homes in the development that sold last year, the highest price paid was for No 4, which sold for €435,000, according to the Property Price Register.

Ms Healy says The Stables is in a great location, just west of Ballincollig, with easy access to the South link road.

VERDICT: You're definitely at the races if you can pony up for a home at The Stables. Onto a winner.