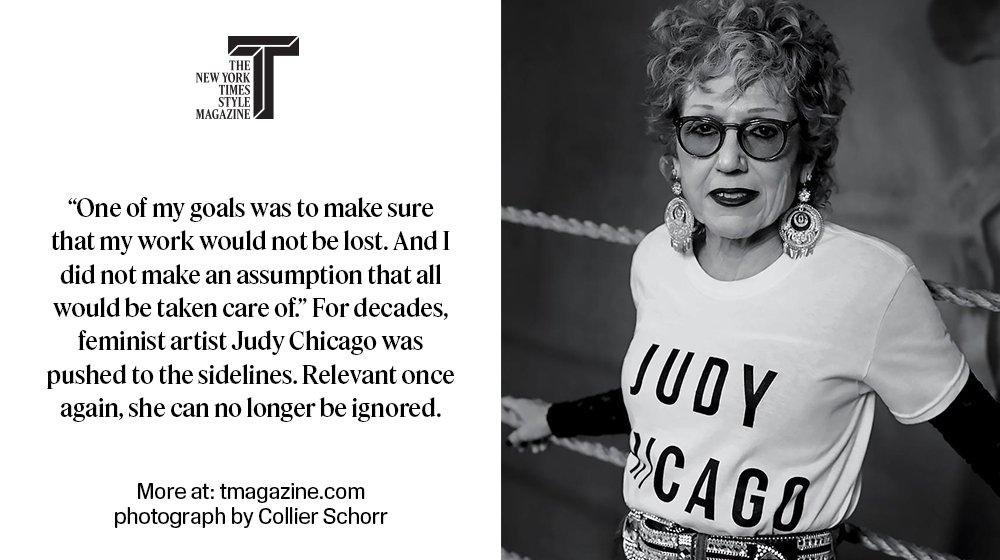 Has culture finally caught up to artist Judy Chicago? | Datebook

In a world reverberating from the societal tidal waves of #MeToo, Kamala Harris’ historic vice presidential victory and a revitalized women’s movement, it feels like culture has caught up with Judy Chicago.

Throughout her career, the 82-year-old artist has been both celebrated and maligned for her work across media that challenges notions about gender and the role of women in history. Looking at some of Chicago’s most well-known projects, you can see the building blocks for this current era of art and activism.

There’s “Womanhouse,” the ongoing series of collaborative exhibition and performance spaces that first showcased feminist art in 1972 at the California Institute for the Arts. Then there are the life-and-death themes of her “Birth” and “Holocaust” projects — the latter of which was criticized for its intersectional approach.

But undeniably, it is “The Dinner Party,” an epic installation of 39 place settings representing real and mythological women, that best shows the polarized reaction to Chicago. Its 1979 debut at the San Francisco Museum of Modern Art brought enthusiastic crowds but also sexist derision from critics who dismissed the work. New York Times critic Hilton Kramer called it “an outrageous libel on the female imagination.”

“It became a visible symbol for everybody who had ever been erased,” Chicago tells The Chronicle in a video call from the home in Belen, N.M. that she shares with her husband, photographer Donald Woodman.

In the 42 years since, it’s a work she’s either had to live up to or live down the response to, depending on the audience.

“It was like I lived two lives,” she says. “In the art world I was shit,but in this larger world there was this ever-expanding audience for whatever I did.”

This month, Chicago’s impact on culture beyond that landmark work will be on view around the Bay Area. In addition to the publication of her autobiography, “The Flowering” (Chicago’s 14th book), a confluence of exhibitions offers viewers a unique chance to immerse themselves in her art.

“Judy Chicago: A Retrospective” was originally scheduled to coincide with the centenary of women’s suffrage in the United States in 2020. The pandemic delay, however, now allows it to coincide with Chicago’s solo show “Human Geometries” at the Jessica Silverman gallery (opening Aug. 27), as well as in the Berkeley Art Museum-Pacific Film Archive’s “New Time: Art and Feminismsin the 21st Century” (opening Aug. 28.).

“It’s quite serendipitous,” Chicago says of the timing. “It’s allowing people to not only learn about the reality of my life and what a struggle I’ve had, but to do so in light of this complete re-evaluation of my career that’s instigated by Claudia’s exhibition.”

Chicago cites “the tools that have always been used against women in art being used against me: erasure, marginalization, only showing part of my work,” especially in relation to “The Dinner Party.” But her work has shown she is ultimately an artist who transcends any one project, and who has become a symbol of sea change.

As author and activist Gloria Steinem says in her introduction to “The Flowering”: “I can divide my life into before and after Judy Chicago.”

Before the international recognition of “The Dinner Party,” the woman born Judy Cohen renamed herself, nodding to her city of birth. In a famous ad in ArtForum in 1970, she announced, “Judy Gerowitz hereby divests herself of all names imposed upon her through male social dominance and chooses her own name, Judy Chicago.” It was an act of self-creation following an identity crisis after the death of her first husband, Jerry Gerowitz, that has parallels to how some 21st century artists now imbue identity and chosen names in their work.

This year Chicago discovered Megan Thee Stallion when the rapper posted a photo with a Christian Dior purse featuring Chicago’s art on Instagram. 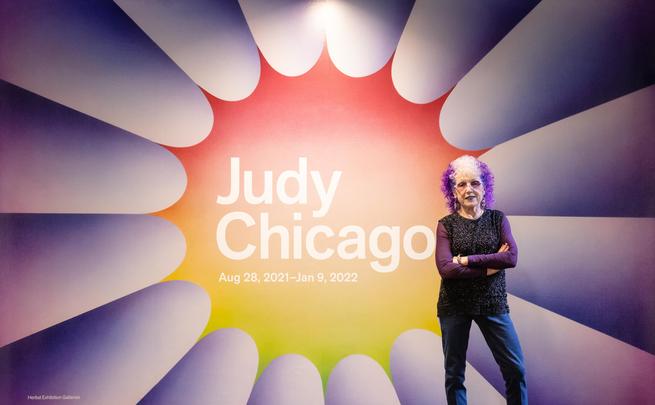 “There was one video of hers I thought was incredible,” Chicago says. “When I was coming up, any strong women like (artists) Louise Nevelson or June Wayne were described as bitches. (Megan Thee Stallion) does this song, ‘Bitch, bitch, I’m a bitch!’ and I’m like, ‘Yes!’ There was something about her name also which projects a level of permission she gives herself. I guess I did that too.”

In planning the de Young retrospective, Schmuckli came to feel that one of the keys to appreciating Chicago’s body of work was understanding that declaring her personhood outside of the patriarchy had made her “an artist whose radicality hasn’t let up.” That’s especially significant, Schmuckli says, in light of how pushed to the margins Chicago has been in parts of the art world.

“The brutality of the derision she faced was awful, and that goes back before ‘The Dinner Party’ to the beginning of her career trying to make it in this macho Southern California art world,” Schmuckli says.

It’s that ongoing radicality in subject matter, explorations of media (Chicago’s work spans painting, sculpture, installation, textile, porcelain and smoke) and identity that can make Chicago feel more like an artist of the 21st century than one who created an extensive part of her body of work in the 20th.

“In her transgressive, experimental practice, she’s actually laid the foundation for so many contemporary artists who are now working across multiple media,” says FAMSF Director Thomas P. Campbell. “This is also an artist who took on subjects that were taboo or ignored in the Western canon.”

“As the decades go on you begin to understand that art history is written backwards,” Chicago says.

Fittingly, the retrospective also will take you through Chicago’s career in reverse chronology, starting with her most recent work, including the ruminations on mortality represented in “The End: A Meditation on Death and Extinction,” as well as explorations of toxic masculinity in “PowerPlay.”

As you move through the galleries, you will delve further into Chicago’s career, including materials related to the creation of “The Dinner Party” (the installation itself is housed at the Brooklyn Museum and will not be traveling) to her early experiments with abstraction in sculpture and painting.

“In my early L.A. years, I created the building blocks of my whole career in terms of my color system,” Chicago says. “People will see, starting from the end and going backward, a consistency in my work’s merger of color and surface, whether it’s on glass, porcelain, needlework or in the surfaces of my early sculpture.

“You never want people to look at your early work and think it’s the best,” Chicago continues. “I think sometimes people are comfortable with an artist’s early work, and they confuse comfort with quality.”

For Campbell, the Chicago retrospective is indicative of conversations that have been happening in museums in recent years about who is represented in special exhibitions.

“I think what you talk about with Judy Chicago is a recalibration of the canon,” Campbell says.

It’s a conversation, he acknowledges, that Chicago has been at the center of for more than half a century.

“One of the things I hope that people will ask is, ‘Why did the art world attempt to keep my work out of it for so long?’ ” Chicago says. “There’s a lot to be learned from asking that question.”

Bay Area museums, galleries back with big experiences this summer