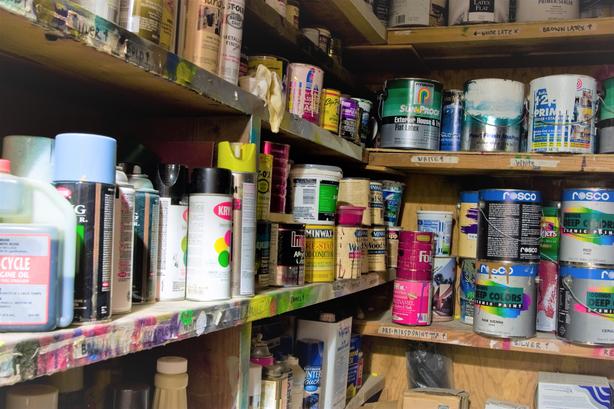 Thank you for supporting our journalism. This article is available exclusively for our subscribers, who help fund our work at the Chicago Tribune.

Bob Prainito of Geneva was in St. Charles early Saturday morning to do a little tidying up of sorts.

“I’ve got some latex paint and a few electronics I wanted to get rid of,” Prainito said as he lined up in a parking lot just off of Randall Road. “I’m glad to have a place to get rid of these items for sure.”

Beginning at 8 a.m., the county was accepting a wide range of items from clothing and books to more environmentally challenging items like electronics, latex paint and aerosols.

An army of workers wearing vests were already on hand doing set up well before the 8 a.m. start under the direction of Kane County Recycling Program Coordinator Jennifer Jarland, who traveled from various collection points on bicycle.

“I feel like there is an increase in things being dropped off this year now that we’re starting our programs up again and because of COVID people have had a lot of time to clean up their spaces and bring in more things,” she said. “All the materials we are collecting today are different – everything that happens to them after you drop them off is different. The reason we have things like this electronics program and have had it over 20 years is because of the hazardous nature of some of the materials.”

Jarland explained that “there is a law – the Consumer Electronics Recycling Act – that requires electronics be recycled and not landfilled” and that “the county fulfills that role.” 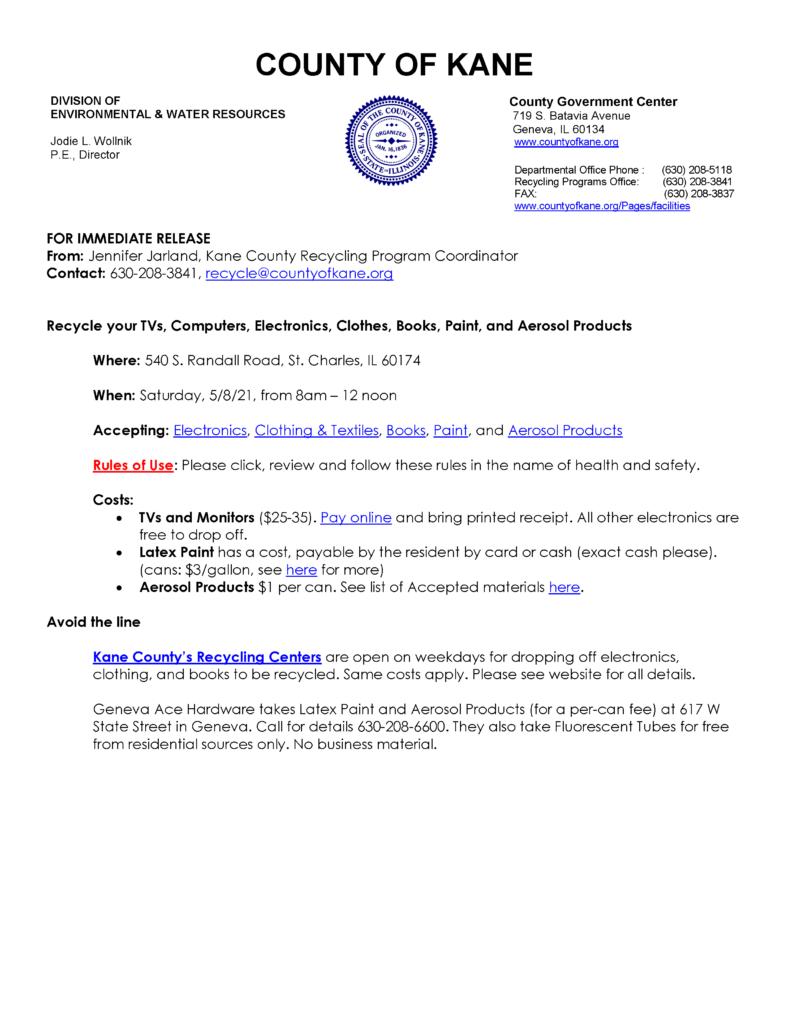 “The clothes all get taken by the same company that takes the electronics and they are a non-profit and things are sorted,” she said. “The clothing then goes to a non-profit. We will probably fill two 53-foot semi-trailers with electronics and clothing and also fill a ... Dumpster with books.”

Many others including Prainito brought cans of paint. A company known as ePaint Recycling out of Battle Creek, Michigan, was accepting cans under the direction of Jason Emig of Kalamazoo.

Emig said the “used and unwanted paint” is placed in vats and “we mix it up and add an additive and it makes brand new paint.”

“The paint that is made is actually better than new paint – it’s basically a one-coat paint,” Emig said. “Builders ask for it. A lot of people do.”

Emig predicted Saturday’s collection would fill 10 totes “which each contain about 200 cans of paint.”

Paint was far and away the major item being dropped off by visitors like Batavia resident Kristen Gorski, who said she too was recycling it as well as “books, clothes and shoes.”

“I go once or twice a year to these collections and mark them on my calendar and look forward to them,” Gorski said. “I like getting rid of this stuff in an environmentally safe way.”

Brian Griffin of St. Charles said he brought “a lot of extra paint that was just sitting around the house in the basement.”

“This is a great way to ecologically get rid of the paint the right way instead of dumping it down the drain,” Griffin said.

Ron Rosenhagen of Elgin said he brought three five-gallon buckets of paint as well as nine gallon cans of additional paint to the event Saturday.

“I’m definitely happy to have a place to get rid of this and I want to protect the environment,” he said.

David Sharos is a freelance reporter for The Beacon-News.