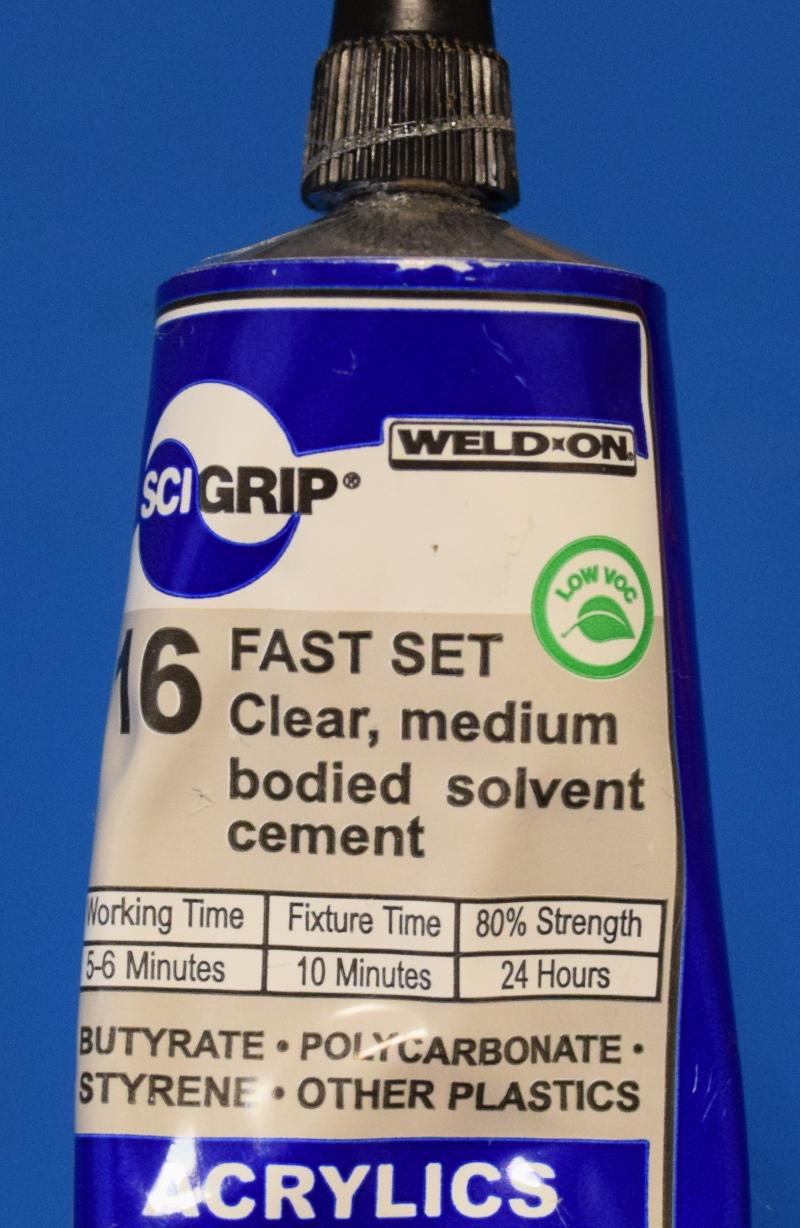 When I first started getting into 3D printed projects that would require final assembly from multiple parts, I wanted to make sure I had an adhesive that would really hold up. I couldn’t imagine anything worse than spending 10’s of hours printing and assembling something, only to have it fall apart because my adhesive wasn’t up to the task. So I spent a lot of time trolling 3D printing message boards and communities trying to find the best way of gluing PLA. It should come as no surprise that, like everything else in the world, there are a ridiculous number of opinions on the subject.

If you’re printing with ABS, the general wisdom is that solvent welding with acetone is the best bet. You put some acetone on the printed parts, rub them together, and the plastic fuses together. This happens because the ABS melts slightly when exposed to the acetone, so they end up essentially melding into one piece. This sounded like exactly what I wanted, but unfortunately, acetone doesn’t have this same effect on PLA.

After some more research I found people suggesting Weld-On #16, an acrylic adhesive that will actually melt PLA. A little of this applied to the parts, they said, and you can solvent weld PLA just like acetone on ABS. Sure enough, the stuff works great and I’ve used it to put together nearly everything I’ve printed in PLA over the last few years. Only problem is, this stuff is a bit nasty, takes 24 hours to fully cure, and nobody has it locally.

So as an experiment I thought I’d take a look at a few adhesives sold at the local big box retailer and see if I couldn’t find something comparable. Do I need to keep ordering this nasty goop online every time, or can I pick something up off the shelf? More to the point, is solvent welding PLA really any better than just gluing it?

To test the different glues, I came up with a simple testing procedure. It’s perhaps not the most scientific of setups, but I think gives me enough information given the relatively stress-free life a 3D printed part lives.

The test setup consists of two rectangles, printed at fairly typical settings (0.2 mm layers, 30% infill), which are glued together at 90 degrees of each other. Through each rectangle is run a metal rod: one of the rods is inserted into two eye hooks installed in an overhead beam, and the other rod is attached to a luggage scale with a short length of chain.

Pulling down on the luggage scale allows me to put tensional force on the two glued pieces, with two possible outcomes: either the printed piece breaks, or the glue releases. For my purposes, I will consider the printed part breaking before the glue releases to be an automatic “win”. Remember, my goal here is only to find if the glue is strong enough to be used for typical 3D printing applications; not an attempt to find the ultimate strength of the bond.

I went to the adhesive section of Home Depot and selected a number of glues that advertised they would work on plastics. I avoided anything that cost more than $10 USD, as at that price, I might as well just stick with the Weld-On #16 from Amazon.

For each glue, a pair of rectangles was printed and sanded on the mating surfaces with an 80 grit sanding block. The pieces were then glued as per the instructions, and held together with clamps for the recommended cure time.

As mentioned previously, Weld-On #16 has been my go-to PLA adhesive for years. It has a thick consistency that doesn’t run which is very nice, but it does have that strong chemical smell that acrylic glues tend to have.

Once you apply it to the parts, you can see the top layers of PLA start to melt and get tacky. I usually push the pieces together, rub them back and forth a bit, and then put the part into clamps until everything solidifies. Unfortunately, that’s about 24 hours.

The work time with Weld-On #16 is around 5 minutes, during which time you can reposition the parts easily. This is a big help when trying to line up printed parts that don’t have any pins or features to help keep them oriented correctly.

As expected, this glue preformed very well. The luggage scale maxed out (100 lb), and shortly after that one of the rectangles broke.

This has been my day-to-day cyanoacrylate for awhile now, so I was interested to see how it would work on printed parts. I really like the hard plastic bottle this comes in, as the side mounted “triggers” give you exceptionally fine control over the pressure you put on the internal tube. Combined with the long thin spout, it’s very easy to get this glue down into tight spots.

Being a gel, this glue doesn’t really run once applied. That makes it great for working on vertical surfaces or other hard to reach places. Unfortunately, the gel makes the printed parts extremely slippery. This combined with the roughly 30 second work time makes it difficult to get proper alignment before it sets.

When tested under load, the Loctite Super Glue Gel survived past the breaking point of my test pieces just like Weld-On #16. I’ll admit I was very surprised by this, as I had assumed none of the glues would have been as strong as the solvent welded pieces.

Truth be told, I actually bought this as a mistake. Originally I thought it was more like the traditional Gorilla glue, and only realized after I got it home that this was yet another cyanoacrylate formula. You’d think I would have noticed that the stuff isn’t brown, but clearly not.

This glue is a little on the watery side, but not too bad. Working time was quite long, on the order of 2 minutes. The instructions don’t call for clamping, but given the long work time I kept it clamped for about 5 minutes to be sure everything had hardened up.

I know it isn’t the most important aspect of this test, but for the sake of completeness I do want to note that the bottle design is a bit annoying. While the spout is the longest out of the all the glues tested, it’s so thick that accurate application is unnecessarily difficult in tight spaces. The nozzle opening is also very wide, so forget about putting this stuff on small pieces.

In the load test, Gorilla Super Glue did quite well, breaking at 87 lb. Even though this glue didn’t end up being the strongest of those tested, the long work time is extremely handy and makes it stand out from the others.

This one is rather interesting, as it is specially formulated for hard to glue plastics and comes in two parts. You first use the “Activator” on the plastic, wait a minute for it to dry, and then apply the glue and clamp the pieces. This seemed a little gimicky to me when I saw it in the store, but figured it was worth a try.

The “Activator” goes on with a felt-tip applicator, and judging by the smell and way it evaporated off the pieces, I’m fairly sure it’s largely isopropyl alcohol. The glue itself is a relatively thick gel and has a working time of about 30 seconds. I was able to reposition the pieces without trouble.

Performance in the load test was the poorest out of all the glues, the bond broke at only 50 lb. To be fair there might be other types of plastic that this product works well on, but PLA is certainly not one of them.

This is a pretty run of the mill “All Purpose” glue that is advertised to be stronger than cyanoacrylate. Unlike most of the other glues tested, this one calls for a half hour of clamp time before reaching full strength.

This turned out to be one of the thicker glues tested, and the claimed 30 seconds work time seems to be a considerable underestimate. In fact, this glue didn’t really start to “stick” until about 2 minutes in. Such a long work time is very forgiving and would make this glue perfect for putting together fiddly little parts.

Unfortunately, DAP Rapid Fuse didn’t do well on the load test. It broke at only 57 lb, the second lowest result. I was particularly disappointed with this one, as I’ve seen this glue specifically mentioned online as being a good choice for PLA parts.

This is the store-brand cyanoacrylate “Super Glue” from the Home Depot. I got this one because it was very cheap (50 cents per tube, in the 4 pack) and because I thought it would be interesting to test a straight cyanoacrylate glue that wasn’t advertising some special features or formulations.

It’s extremely watery, to the point of literally behaving like water when you put it on the surface to be glued. You need to be very careful about making sure this stuff doesn’t go where you don’t want it. I thought the warning on the back about protecting the work area from spills was odd at first, but not anymore.

The worst part about this glue though is the nearly instantaneous bond. I understand that’s desirable in some situations, but when working with parts that need careful alignment it’s a nightmare. Even for my test pieces, I wasn’t able to get them properly aligned at 90 degrees before the glue had set up and couldn’t be moved. Had this been a multi-part print I was assembling, this could have been a disaster.

In what was probably the biggest surprise of this test however, the basic HDX Super Glue did not fail under the load test. The printed test pieces broke before the bond released, making this an automatic “win”. Working with it is kind of terrible, but credit due on the strength of the bond.

Overall, I still think that Weld-On #16 is the best PLA adhesive I’ve personally used. The long work time combined with the high strength bond is simply an ideal combination. Online-only availability, long cure time, and the fact it smells like a chemical factory are bummers to be sure, but not deal-breakers if you want to make absolutely sure your project isn’t going to fail on account of the adhesive used.

That being said, the performance of the Loctite Super Glue Gel really surprised me. Truth be told, I feel a little foolish having used this glue for so long in other applications and only now trying to use it on printed parts. There’s probably a lesson to be learned there about getting stuck in your ways. The work time is a bit short, but otherwise it’s an extremely close alternative to Weld-On #16; close enough that I’ll be using it for most of my PLA gluing from here on out.

Unless I’ve missed something even better? What are you using? Let us know in the comments about your favorite PLA-compatible adhesive. Do we need another round of this PLA adhesive slug fest?