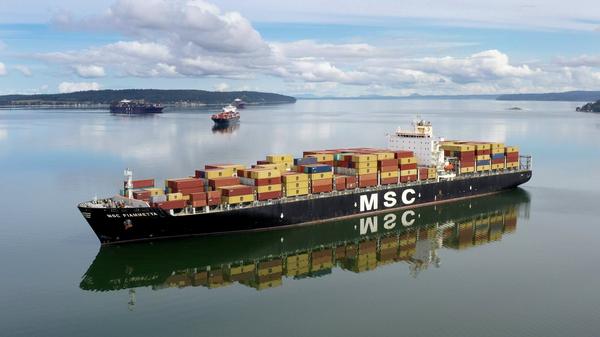 HOLMES HARBOR, Whidbey Island — They moved here for the quiet of this fjord on Puget Sound, usually so serene people sleep with their windows open, the better to hear the sounds of puffing whales.

But today their homes shake with the pulsating thrum of generators, the air carries the stink of exhaust and the night sky is riven with lights, all from massive container ships, anchored just offshore.

As many as four ships at a time have been moored and chugging around the clock here. One reason is yet another ripple effect from the pandemic, in the increased consumer spending on merchandise that is stressing ports across the West Coast.

“This thing happened in the country with nobody going to restaurants or vacations for a year and a half and they had free cash and decided to make Amazon stocks go through the roof,” said Fred Felleman, commission president at the Port of Seattle. “We have flooded the market and created this inability for the tail to keep up with it, there is this whole ripple effect.”

The Northwest Seaport Alliance, which includes the ports of Seattle and Tacoma, saw record-breaking volumes for the month of May, handling a total of 333,026 shipping containers, or 20-foot equivalent units (TEUs), growing 38.4% compared to May 2020. The total number of containers in and out of the port is up nearly 20% year over year since 2015, according to the alliance.

The containers can’t be unloaded from the ships fast enough because there isn’t enough room in the terminals. And there are not enough rail cars to haul the containers away. “And this whole cavalcade happened because of the pandemic and we never expected to see such a surge, other than the seasonal holidays and kids going back to school,” Felleman said.

The problem is West Coast wide — but timing also couldn’t be worse for the Port of Seattle, where the boom in commerce has combined with a bust in handling capacity Aat Terminal 5. Two slips are out of service during construction for $300 million in improvements to expand capacity and allow the terminal to accommodate even the biggest ships.

That’s complicated dockside work even as cargo is surging.

“With us down a terminal they have to wait in turn to find their slip, and there are more of them at any one time than we have ever had to handle, so there is a little bit of a perfect storm going on,” Felleman said.

Which is part of why normally quiet anchorages at this time of year such as offshore of Manchester, Kitsap County, near Blake Island, usually used only in winter, and at Holmes Harbor, usually hardly used at all, are booming with ships. Container ships are staging for days at a time, until they can get into port to unload.

The ship’s agents don’t want their ships there any more than the residents do: the anchorage at Holmes Harbor is way out of the way of the Puget Sound shipping lanes, and it’s difficult for pilots to get to. “We use it only when everything else is full,” said Laird Hail, director of Puget Sound Vessel Traffic for the U.S. Coast Guard, based in Seattle.

Hail said he has 42 anchorages around the region to choose from but only 12 of them are suitable for the largest ships. Five of those 12 are in Yukon Harbor, offshore of Manchester, and four are in Holmes Harbor, both near residential areas, said Hail, who said he’s been getting complaints aplenty.

But he has no choice in a situation that demands anchorage for ships some 1,200 feet long. Such ships require deep water, but not so deep their anchor chain is at a length that allows drift. The harbor also has to be sheltered from winds and current and to allow enough space to keep the ship well out of traffic. A spot, in other words, like Holmes Harbor.

“The ships have to go someplace,” said Hail, adding he feels for the local residents. He said that ships are being urged to keep their brightest lights shut off at night, leaving only deck lights for crew safety. The noise of generators can’t be helped; the ships need to be able to run their lights and refrigeration and systems for the crew on board. Fumes also are a reality of diesel-powered generators.

It’s a situation not changing anytime soon either, and with the biggest season during the holidays yet ahead. Relief won’t come until January at the earliest and that is probably optimistic, Felleman said. 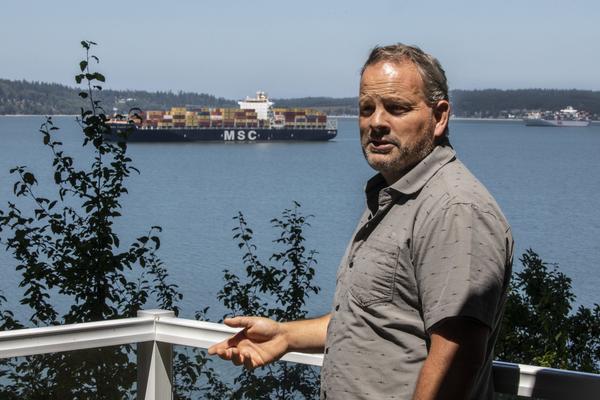 As the ships huff and rumble, the locals have noticed — and that’s not even counting the people.

Sightings of orcas and gray whales, normally frequent here, have nearly stopped altogether, as whales avoid the area and its industrial noise.

That has cut off the locally beloved Sounders, as the local population of gray whales is known, from some of their prime spring feeding areas, where they target ghost shrimp in spring to fatten up before continuing their northward migration to the Arctic.

People who moved here for the island life and to live close to nature did not count on living day in and day out with anything like this.

Biologist and documentary filmmaker Florian Graner said he has recorded noise levels at 82 decibels from the ships — a level of impact similar to a gasoline powered leaf blower. In addition to the annoyance of the racket, he is concerned for the sea life that is utilizing the near shore and harbor again, the reward for years of restoration work.

Graner has filmed sixgill sharks, juvenile Chinook salmon in lush eel grass beds, harbor porpoise and herring spawning, all just off shore. The island’s pride is an elephant seal that’s taken to hauling out on a nearby island. Transient orcas are regulars, as well as gray whales — or at least they used to be.

“Since the ships have anchored here I have not seen a single whale,” Graner said. “They are not going to turn (into the harbor) where the jackhammer is.”

He and others worry about precedent.

“We don’t want to become outlying moorage for the Ports of Vancouver and Seattle.”

He said the situation in California is far worse, with as many as 40 ships waiting to come into port, at anchor and even drifting out at sea. “It’s the unbelievable surge in container volume based on consumer demand during COVID, the whole system is very, very stressed,” he said.

That includes insufficient rail capacity as far away as Chicago, sending ripple effects of disruption all the way to the West Coast.

Some vessels have started slowing their route here, Moore said, knowing they will just have to wait anyway, but others know they want to get their spot in the queue. So, the ships wait at anchor.

That means for Manfred Bartz, his view now isn’t the eagles riding the wind off the bluff overlooking the harbor, but ships stacked six rows high with containers.

“Smack dab in the backyard,” he said with a sweep of his arm. “We live right here on the water, sure, we are lucky. But it’s like someone leaves a big truck, just parks it and idles it in front of your house.”

Especially in summer, now that gatherings are finally allowed, Ann Posner said she is worried now not about COVID-19, but what her out-of-town guests will think of the noise when they arrive next week. Will she have to have everyone inside? With all the doors and windows closed?

The thumping noise that permeates the neighborhood reminds her of the old sock factory she and her husband, retired from the U.S. Foreign Service, lived in while posted in Sarajevo, she said.