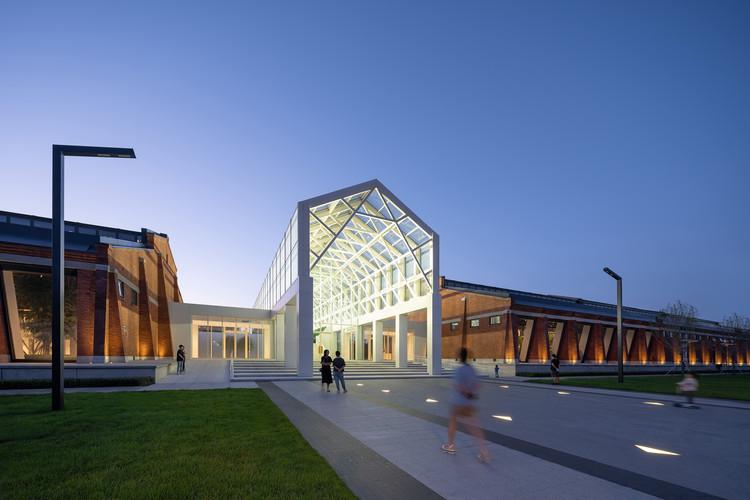 Text description provided by the architects. Dongmaoku, a former warehouse campus in Shenyang, is the PRC’s first generation of logistic facilities constructed since the Korea War period. With over 30 individual warehouses, Dongmaoku has significant value for the study of the logistics building typology in modern China. Although Dongmaoku was listed as ‘valuable historical buildings in Shenyang’ in 2019, it became a real estate development project in 2020. After the Spring Festival of 2020, the government decided to preserve 7 warehouses in Dongmaoku. URBANUS was invited to give a master plan for the non-housing part of this project. With the completion of the first phase of the Dongmaoku renovation, a new energetic scenario has shown in the community. This achievement confirms the importance of five critical paths during the design process within a very short decision-making period.

After the field trip, the existing warehouses are reconsidered to house new public functions. Since this proposal is the re-use of the existing buildings and could save a lot of paperwork and construction time, the client finally agreed to make this change. Based on this plan, other surrounding public spaces could be seen as the context to the historical buildings. Due to the limited number of preserved warehouses, it makes less sense to only zoom into the single value of each building. Our choice is to go evolution and look into the whole value. Thus, the core of the design shifted from the individual exhibition center to a larger-scale urban renewal program. This could not have been achieved without the support of the client who initially did not intend to commission all designs to a singular firm.

In terms of architecture, the 30-meter wide pediment of the warehouse is extracted as the basic motif. Different massings are generated by the morphology of this motif to fit into different programs. This is a proper way to achieve unity between the new and the old in terms of building massing. At the urban design level, it’s important to reshape the old linear industrial pattern to the new netlike one in order to fulfill the residential community’s needs. Making the #2 and #4 warehouses as the backdrops, two parks with their own characteristics are planned in both south and north side. 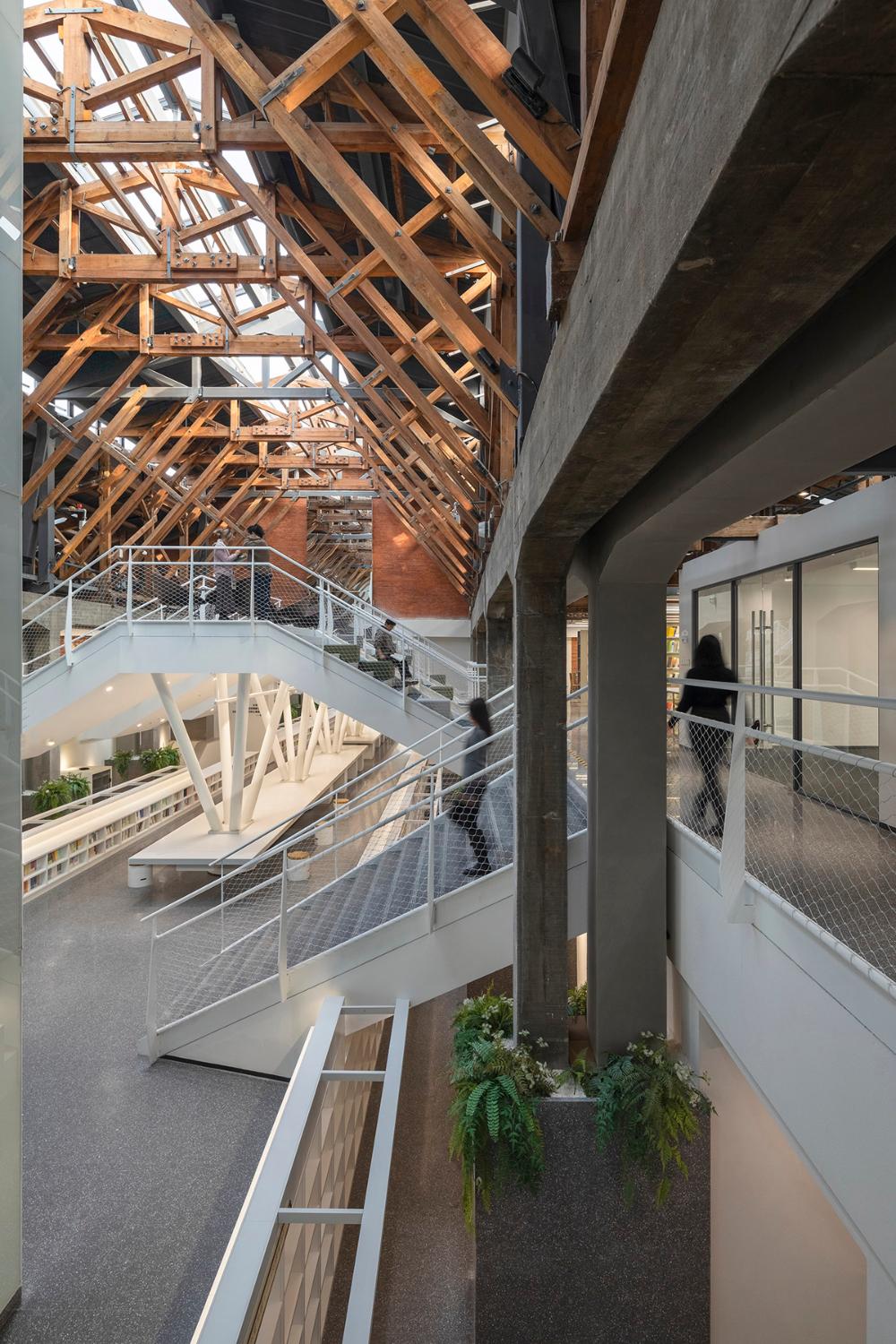 Critical Path II: the Procedural Justice of the Conservation of Historic Buildings. Due to the history of the formulation of the current heritage conservation codes, it is oriented more to the preservation rather than utilization, and such an orientation would limit the creative and effective reuse of the current buildings. Therefore, the Dongmaoku project provides not only the architects but also the heritage preservation researchers an opportunity to make a change. We share a parallel study timeline with the heritage conservation guideline team led by the processor Chen Bochao from Shenyang Jianzhu University. With a common window period, the architects and the researcher could share the information, and map the re-utilization design inside the frame of the new version codes.

Critical Path III: the Rebirth of the Existing Wooden Structure. One of the main technical difficulties for the renovation is the dilemma between the reuse of the existing timber structure and the current codes. The wood truss system in #2 and #4 warehouses are originally designed by Soviet experts with impressive structural beauty. However, if this warehouse is to be transformed into a public gathering space, this wood system no longer meets the structural codes. If replaced with bigger elements, the outlook of the structure would be different. After a concerted effort from the architect and structural engineer, the solution is to implant new steel trusses with similar shapes into the existed wood system, and the wood elements are all unloaded and do not bear the roof weight anymore. Thus, the wooden trusses become pure decorative elements rather than being structural components, which makes sense to the structure codes.

Critical Path IV: Greenhouse for Community making. The first phase of the renovation project includes the #2 and #4 warehouses, and both of them are composed of three 30m*30m units. The architect could only do little change due to the heritage preservation guideline. For the building with large depth and small window opening, the skylight is a good solution for daylighting and ventilation. So, why not make it into a greenhouse garden? Thus, a new typology appears: both warehouses have a spatial sequence with a garden at the beginning. This welcoming green scene would become a good gift for the visitors in the northern cold region.

#2 Warehouse is renovated into a community library. In an era of online reading, the only way to rescue physical reading is to create an attractive physical atmosphere. The existing space provides a sacred aura for a reading hall, and the greenhouse introduces the garden model into the conventional library typology.

#4 Warehouse is renovated into a sales office. The entrance is named ‘the garden of Eden’, a chatting area surrounded by tropical plants and water features. However, this space is not reached immediately, as one has to go through a gallery exhibiting the Dongmaoku history into the heart of the central hall, and then relax in this space.

Critical Path V: the Spatial Justice of the Urban Renewal. Two renovated warehouses are linked together and are turned into a community center. The joint massing continues the geometry abstract of the old roof frame system and defines a romantic entrance like a wedding hall, which sets off the rustic old warehouses. As an urban manifesto, the ‘spatial justice’ fights for equal rights for less-powered groups to use urban public space. Narrowly speaking, spatial justice is trying to overcome the discrimination between dwellers in the same residential areas. We take the advantage of a high-end development to benefit local residents. By altering this industrial heritage into an urban public resource, different social groups could find their own identification here: nostalgia for the elderly, fashion for the youth, friendly for the low-income, appropriate for the high class, etc. This development could be an opportunity to use the new cultural landscape to alleviate social differences in order to achieve an ‘imaginary community’.

Launched during a severe pandemic period with no access to the site, and completed within an intensive time frame, the Dongmaoku project forces us to go back to the fundamental logic, and work under the guideline of current heritage preservation codes in a straightforward way. This requires logical reasoning to achieve the objectives by identifying the most important critical paths. Now, the best parts of the Dongmaoku rehabilitation are still undergoing. Two renovated warehouses have helped to strengthen the public confidence in the project. The old wooden trusses demolished from other warehouses would be placed on the rooftop of the new primary school. As an example of the systematic recycling of old history, this design gesture is one of the witnesses of the rebirth of Dongmaoku.