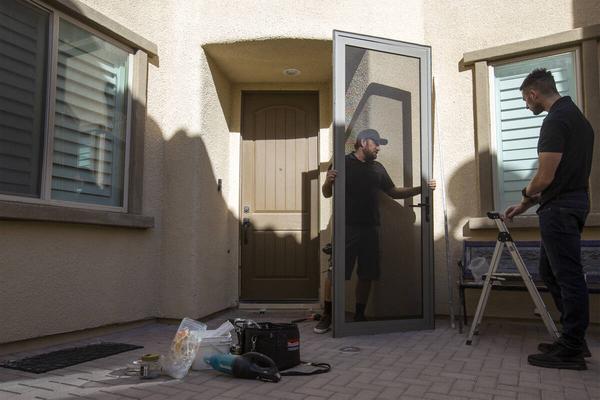 Sun City Summerlin residents are investing in security systems and teaming up to watch one another’s homes after a recent increase in burglaries in the neighborhood.

While burglaries across Las Vegas are up 9 percent this year, burglaries in Summerlin have increased more than any other neighborhood, by 34 percent, according to data from the Metropolitan Police Department provided Oct. 15. Burglary arrests declined 16 percent in Summerlin during that time.

But Clark County Sheriff Joseph Lombardo told the Review-Journal that three people have been arrested and three more suspects identified in a recent string of burglaries in Sun City Summerlin.

At least 72 burglary reports were taken in Sun City Summerlin between April 1 and Oct. 1, according to online crime mapping. Lombardo said 49 of those crimes were related.

“This is one of those things where neighborhood watch type programs are beneficial to those close-knit neighborhoods,” he said. “Especially in senior communities where people are perceived as an easier victim.”

Metro released crime reports for 17 out of 70 burglaries when requested by the Review-Journal. Metro denied the rest, citing open investigations.

The records showed cash and jewelry were stolen most often and that five of the victims were over 80.

In an email sent Oct. 14, the Sun City Summerlin Community Association said it will be emailing residents every day there is a burglary in the area. The emails come after a letter from the association last month notified residents of increased police activity in the area.

“You probably have noticed an increased presence of Metro in our community,” board President Richard Clark wrote in the letter. “There were seventeen marked and unmarked cars in our community on August, 31, 2021.”

Lombardo said residents should expect increased patrols to continue through at least October.

In September, Metro released video of a suspected burglar believed to be tied to recent crimes near Summerlin, although police did not specify if Sun City was involved. The department declined to provide information on the three people who were arrested.

Jeannette Demarco, who lives on Cedar Heights Avenue, came home on a hot August day to take a nap in her living room. While the 85-year-old, slept, a burglar used glass cutters to sneak in her bedroom. Demarco woke up 15 minutes later and walked into the bedroom where she said she found herself in the middle of a nightmare

“I opened the door, and every one of my dresser drawers was turned upside down pulled out,” she said. “A new pillowcase was missing. I guess the thief carried his loot in that.”

Demarco said the items taken were sentimental, like a tennis bracelet from her oldest daughter, a pin from the New York State PTA and a jewelry box her daughter was given 40 years ago.

“It was sentimental stuff of my husband’s because he’s no longer with us,” she said, remembering the father of her seven children who died two years ago. 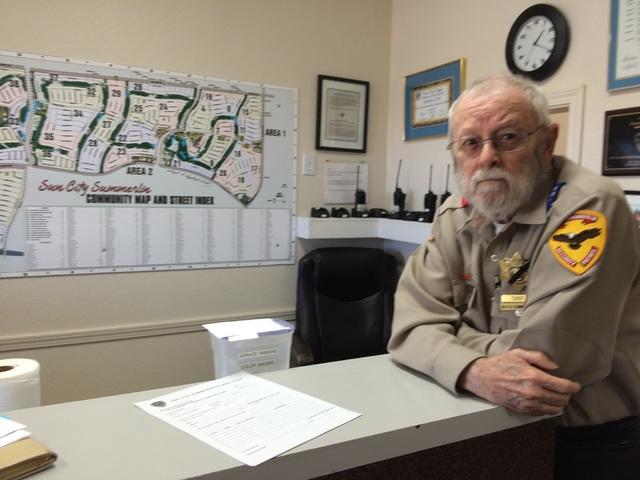 “She’s been alone in the house since my dad passed,” Joanne Demarco said. “Even though my brother, my sister and I live less than seven minutes away, it took away her security. She doesn’t want to sell the house.”

Elizabeth McClure, 65, was out of town when someone kicked in her front door on Sept. 7. Nothing was taken, but it was enough of a scare to make her invest in security cameras.

“I’ve gone through everything in the garage and the house,” she said. “They took nothing. Things are locked up pretty well.”

McClure said she had lived in her condo on Trailwood Drive for 12 years without incident.

“Now we do have some security,” she said a month later. “We’ve had some improvements on the door and door jam and added surveillance so we will get a picture.”

Vincent Oliver, 61, said he’s lived in that area for more than two decades and has had two break-ins. A police report shows the Alessandro Avenue resident came home from a business trip on April 13 to find the back door open.

“Anything of value is in the safety deposit box,” he said. “They might have gotten some brownies from Whole Foods. Nothing of real value is kept in the house. I’ve seen too much. There’s a lot of break-ins in neighborhoods like mine. Why give people the opportunity to take something?”

Corey Ayres, founder of Security Plus in Las Vegas, said he’s received at least three service requests a week from Sun City Summerlin residents over the past six months.

“They’re concerned because it’s a retirement community,” he said. “They feel a little bit more targeted, like they’re an easy target, which is very disheartening to hear.”

Ayres said most of the residents he’s spoken to weren’t home during the break-ins. He suspects burglars were watching the homes and recording residents’ schedules.

“We’ve never had someone break into it,” he said. “We’ve done testing with salt spray, crowbars, knives, bum keys. If somebody does want to get in, it’s going to slow them down quite a bit.”

John Perdichizzi, founder of ASAP Security in Las Vegas and who has a mother and mother-in-law in Sun City Summerlin, said he’s staying well informed about recent burglaries.

“What Metro’s telling us is they’re going after cash, guns, drugs and jewelry,” Perdichizzi said, noting he’s had daily service requests in the neighborhood recently.

Perdichizzi said he advises residents to get window film with a glass break detector. They prevent the window from shattering, but an alarm can still be triggered if the glass breaks.

A 2012 study by the Alarm Industry Research and Education Foundation surveyed hundreds of convicted burglars and found that 60 percent were deterred by home alarm systems.

“They’re concerned about the alarm if they open the door,” Perdichizzi said of recent burglars. “It won’t go off if they break a window … Most of the break-ins are not setting the alarm off. They either had not set the alarm or had no alarm.”