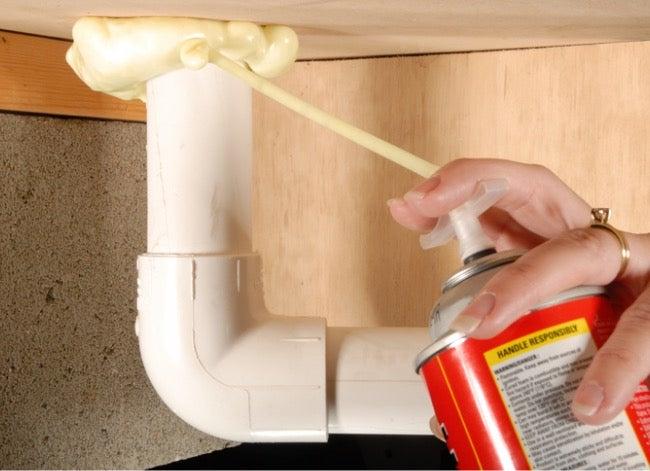 Insulating expanding foam sealant makes quick work of reducing sound transfer, stabilizing a wobbly showerhead, or even securing fragile items for shipping. However, it’s not suitable for all DIY projects, and if misused, it can be more troublesome than helpful.

Packaged in a pressurized can with a straw attached for spraying into gaps and cracks, the terms expanding foam, spray foam, and foam sealant are used interchangeably in the construction industry, but they don’t always mean the same thing.

Some types of spray foam are strictly for the pros, such as Icynene, a foam used to insulate entire homes. These products require special equipment and often contain rapid-expansion foam that requires training to apply with accuracy. In contrast, consumer products, such as Great Stuff, are suitable for around-the-house use, and some crafty DIYers have found ways to use the foam to create cool furnishing projects. Consumer-friendly foams come in aerosol cans and are relatively simple to use.

Before you purchase a can of expanding foam, read on to find out more about this innovative product and learn some crucial dos and don’ts.

DO check the expiration date of the foam before you start spraying it.

In the can, expanding foam is a liquid containing polyurethane components that react when they come into contact with air, causing the liquid to expand. The foam performs best when it’s fresh, and most retailers will remove cans of expired expanding foam from their shelves. Consumers should do the same—toss out a can of expanding foam if it’s past its expired date. Empty foam cans are not considered hazardous and can be tossed with household waste. Dispose of full or partially full cans in compliance with local regulations, which differ from state to state and community to community.

Most of the time, using an old can of foam will result in lackluster performance—the foam will not expand to its typical size, or its components will be sticky and drippy and not expand as intended. In rare cases, using an expired can of expanding foam may present a risk of explosion.

DON’T use expanding foam around outlets and recessed can lights.

In the quest for a draft-free home, it’s natural to want to add some insulation around electrical outlets, but expanding foam might not be the best type of insulation there. The foam expands quickly and can surround the wires entering the box, which makes it difficult, if not impossible, to change the wiring configuration in the outlet. Putting a small amount of fiberglass batt insulation around the box might be a better option. 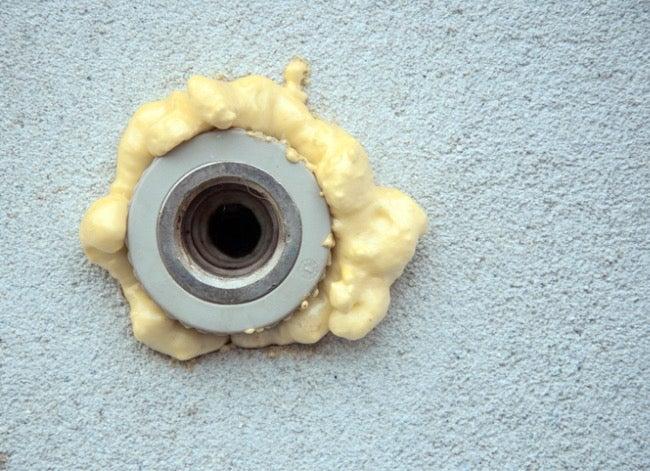 DO use expanding foam to silence noisy water pipes.

Expanding foam isn’t just for stopping drafts and heat transfer—if you’ve purchased a can to seal some drafts and have a bit left over, it’s just the ticket for silencing noisy pipes and water hammer. Water hammer occurs when the valve on a pressurized water line closes, causing built-up pressure in the pipe to shake the pipe, sometimes hard enough to slam it into nearby wall studs or other pipes and cause quite a racket.

If the noisy pipe is accessible, such as overhead in a basement, observe where the pipe is clanging while a friend or family member turns the water faucet on and then off. Spraying some expanding foam around the pipe will stabilize it and keep it from banging and rattling.

DO keep a solvent nearby when applying expanding foam.

After expanding foam cures, any excess is removed by cutting, sawing, or sanding away, so it’s imperative to apply it carefully to keep from getting the super-sticky foam on other things. If expanding foam gets where it shouldn’t, clean it away using a solvent, such as WD-40 or acetone, while it’s still foamy.

For example, if some drips to the concrete floor while spraying the foam around basement pipes, use a piece of cardboard or a stick first to remove the excess and then use solvent on a rag to wipe the residue away. While working with the foam, it’s also beneficial to set the can down on a piece of cardboard to ensure dribbles don’t get on a floor or table.

DON’T use expanding foam near a spark or open flame.

Although some types of expanding foam are designed to impede the spread of flames, such as Great Stuff Fireblock, there’s a fire risk during the product’s actual use.

The compressed gas that propels the liquid polyurethane components from the can is highly explosive, and using the product in a closed-in space, such as under a cabinet or in a crawl space, increases the risk of the gas accumulating and a spark igniting it.

Turn off pilot lights and don’t smoke when using expanding foam. Extinguish candles and open windows to increase ventilation, which can help disperse the gas. Expanding foam is flammable until it’s fully cured. It can take up to 24 hours, depending on the specific product.

DO use PPE when using expanding foam insulation.

When expanding foam is cured, it’s considered nontoxic, but isocyanates—the gases released during the application process—can irritate nasal passages and trigger respiratory problems. Also, when the foam is wet, it can irritate skin, causing rashes and redness. Symptoms are often worse for those who suffer from allergies, asthma, or have skin conditions.

In addition to using the product in a well-ventilated area, wear personal protective equipment (PPE), including disposable gloves, long sleeves and pants, and protective eyewear. If it’s not possible to ventilate the area, wear a respirator mask that features an organic vapor sorbent to keep from inhaling the fumes.