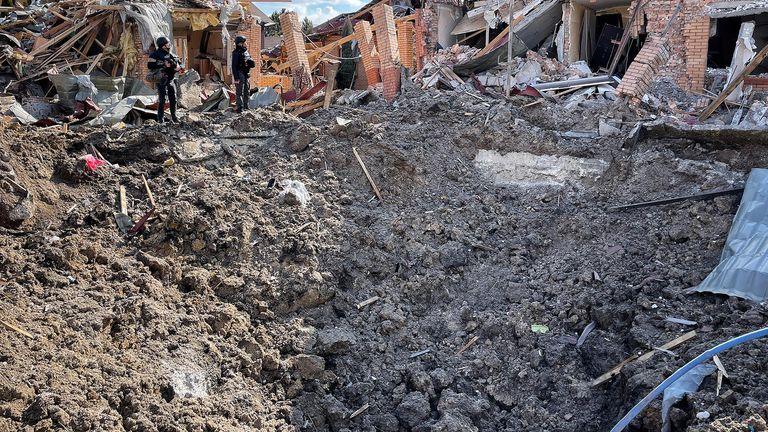 The front garden of the home we're looking at is now a 15ft-deep crater.

The house itself and all those homes surrounding it are shattered hulks with windows, doors and walls blown out and possessions shredded beyond recognition following a missile attack.

This street in Markhilivika in the greater Kyiv region (Oblast) of Ukraine looks like it was once a beautiful, peaceful spot of suburban serenity. It is very far from that now.

The Russian forces appear to have been stalled in their attempts to encircle the capital, enter and take control of the main city - but they are managing to wreak terrible terror on the residents living throughout the Kyiv region.

Live updates: Russia may be 'planning to starve Kyiv into submission'

The Russian troops' advance appears to have virtually halted in the capital's north-western suburbs of Irpin, Bucha and Hostomel.

Towns we thought were almost certain to be overrun within days when we first visited them a week ago are still remarkably holding out.

The Russian troops do not appear to have been able to move beyond the bombed-out Irpin bridge into Kyiv - a bridge so familiar to Sky viewers who saw hundreds of civilians fleeing the fighting to relative safety inside the capital.

Indeed the latest news from those frontlines is that the Russian troops have been pushed back. It is difficult to verify just how accurate these anonymous pieces of information are but the lack of Russian troops over that bridge seem to add credence to these reports.

Again to the east of the capital, the troops which were beaten back in Brovary seem to have been held back. 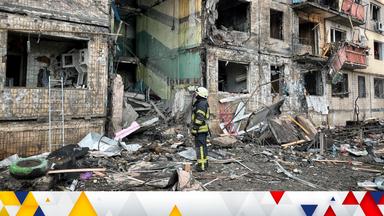 But inside the main city, they've used the recent 35-hour curfew to strengthen and fortify barricades and add to them, using tractors to block roads and rusty old trams have been dragged across, blocking others.

There seem to be more visible numbers of Ukrainian soldiers guarding the city centre checkpoints and more stringent checks of all vehicles and their occupants passing across the capital city.

There have been repeated and increasing reports that Russian saboteurs are operating in all parts of the country and may have infiltrated the capital in order to pinpoint targets and act as guides to any potential attacks.

Please use Chrome browser for a more accessible video player

The apparent lack of progress into the capital - despite earlier signs of the Russian military's possible plans to encircle the city and lay siege to it - has resulted in an intensifying of long-distance random and indiscriminate bombing and shelling in and around the outskirts.

These attacks send terror into the communities and generate a terrible and justifiable horror.

Mikhailo Dotsenko took us into his son's destroyed home in Markhilivka, telling us Oleg was due to be in the house, but at the last minute, he'd been persuaded to visit his parents nearby.

"I don't even know how to describe this," Mikhailo says. "I don't have the words."

He pauses. He can't quite find strong enough phrases for what his family's going through right now.

"There is no humanity here," he goes on. "This is not war with some army. This is war with humans... just eliminating other humans. This is an atrocity for which no judge would ever find any justification. It's madness."

There are few who would disagree with him right now.

Read more: What are the chances of a peace deal with Russia to end the conflict?

Russian troops look like they're struggling to complete their strangulation of the capital anytime soon.

Last week, military experts predicted they could surround the capital within 24-96 hours. Now they're suggesting it could take much, much longer.

But for both sides, Kyiv is everything, the golden prize. And the lack of progress on the battlefield might precipitate more erratic and wretched war actions ahead for the residents of the whole Kyiv region.