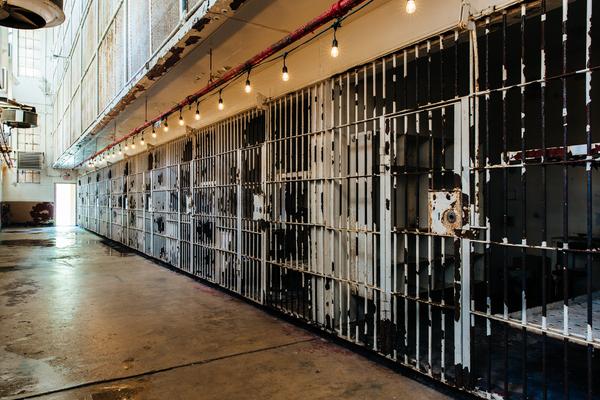 Ohio is home to vibrant cities, delicious restaurants, and apparently, a few ghosts. For those looking for a particularly spooky October, head to one of these cities and visit the various destinations and their paranormal inhabitants.

Stay: The Renaissance Hotel in Cleveland

The Renaissance Hotel is perfect for those seeking an extraordinary glimpse of the skyline or those looking for a spooky evening. The building offers beautiful views of downtown Cleveland as well as a haunted fourth floor, according to the staff. Lights flicker, faucets turn on and off by themselves and toilets are often found flushing on their own.

Bonus: Looking for another haunted stay in Cleveland? Then book an overnight at The Tudor Arms Hotel, a stunning 1930s-era building in University Circle packed with history and whispers of ghost sightings.

Just outside of Cleveland is the Don Pomeroy House in Strongsville. Runaway slaves were hidden in the home's cellar during its service on the Underground Railroad, and many diners have reported interacting with the home's lingering spirits. While you aren't guaranteed to see any ghosts while eating, you can count on the food being hauntingly delicious.

You may not be a cat person after visiting the Fairport Harbor Lighthouse. For years, curators at the Fairport Harbor lighthouse museum swore they saw a ghost of a cat, skittering across the kitchen floor or jumping on the bed. Come and explore the artifacts pertaining to life on the Great Lakes while keeping an eye out for the paranormal pet.

If you're scared easily at the slightest noise, you might not want to book a room at the Lafayette Hotel. Many strange occurrences have been reported at the hotel, including footsteps and voices heard in empty rooms and hallways, appliances turning on and off by themselves, doors opening and closing on their own, luggage and furniture being moved away from rooms -- as well as misty apparitions and ghost sightings. The "Do Not Disturb" sign won't stop the ghostly maid wearing a black dress that has been seen roaming the halls.

The now elegant restaurant has a rather unappetizing past. In 1879, one of the tenants overdosed on chloroform. For more than a century people have heard odd sounds and experienced deeply unsettling feelings on the second floor of the Buckley House. Your senses might be overwhelmed by the delectable fare, but try to listen for some paranormal sounds while dining.

For the spookiest yet educational excursion, head to the Peoples Mortuary Museum. The museum is dedicated to educating the public on the practices and history of mortuary science and has five antique hearses on display. One of the hearses was used as a prop for the 2009 film "Get Low" starring Bill Murray, Robert Duvall and one of the original scream queens, Sissy Spacek.

When wandering the halls of the historic hotel, keep an eye out for the Lady in Green. The woman was the wife of one of the hotel's laborers in 1930. Her husband was killed during the construction of the hotel and his body was never found. Legend says that the Lady in Green continues to search for his body, even in the afterlife. Construction workers who helped the hotel's renovation in 1983 reported seeing her on the Mezzanine level and the Hall of Mirrors.

Eat: The Golden Lamb in Lebanon

Just outside of Cincinnati in Lebanon is The Golden Lamb, named "Ohio’s most haunted restaurant" by the Food Network. Guests and employees have spotted multiple ghosts at the 215-year-old property, including Clement L. Vallandingham, a celebrated Civil War-Era U.S. congressman from Ohio and Sarah Stubbs.

Violins and cellos won't be the only noises you'll hear at Cincinnati Music Hall. The building was built on a property that was occupied by a set of "Exposition Buildings," where human remains and hundreds of skeletons were found. The restless spirits let their presence known by rapping on the ceiling, under the floor, on the doors and windows.

Buxton Inn takes pride in their haunted history. Stay at the hotel and attempt to encounter the apparitions yourself, or book one of their Ghostory Tours, offered on Tuesdays, Fridays and Saturdays. The tours focus on the specifically haunted rooms and mixes history with ghost stories.

At Elevator Brewery & Draught Haus, you can find 12 handcrafted brews, two billiard tables from the 1800s and two ghosts. The restaurant is said to be haunted by Colonel Pritchard, an infamous womanizer that frequented the bar. He was murdered just outside the restaurant in 1909 by a scorned lover, who is said to haunt the establishment as well, frequently appearing as a ball of light.

A building this old is bound to have a few spirits in its midst. Built in 1861, the building was originally constructed as the Ohio State Arsenal and continued that purpose until the late 1970's when the Columbus Recreation and Parks Department took it over. Head to the pottery room to catch sight of a woman who was supposedly involved in a public hanging many years ago and is dressed in period-appropriate clothing. The other spirit dwells in the basement, although their origins are unknown.

The Park Hotel is a popular destination among both the living and the dead. Located in the center of town and surrounded by restaurants, shopping and entertainment, the Park Hotel is supposedly haunted by a woman known as the "governess," who's known to frequent Room 14.

Maumee Bay Brewing Company is the oldest building in downtown Toledo, and some patrons loved it so much that they never left. One of the spirits you can encounter at the restaurant is known as the Captain, described as a happy spirit who likes to hang out in the old lobby area.

Built in 1813 to defend Ohio during the War of 1812, Fort Meigs is the perfect destination for history buffs. Hear muskets crack and cannons roar, view their extensive photo galleries, and maybe catch a ghost sighting or two. If you'd rather read about the hauntings from the safety of your home, Chris Woodyard wrote about her personal experience at Fort Meigs in her book, "Haunted Ohio V: 200 Years of Ghosts."

Established in 1837, the property was part of the Underground Railroad and even had an underground tunnel connecting it to the stone house across the road. While many head to the inn as recluse from the nearby haunted reformatory, you still might not be able to escape the paranormal here.

Although not haunted by ghosts, the Vault Wine Bar still offers a spine-tingling experience. Located in the previous Citizens Bank of Shelby with 30-foot ceilings and marble walls, you can understand what it feels like to be locked up (while drinking a crisp glass of chardonnay).

For the ultimate haunted experience, head to The Ohio State Reformatory. There's not an inch of the massive edifice that people haven't experienced something spooky -- from voices, whispers and footsteps in empty rooms to interactions like being touched or grabbed.

During every Friday, Saturday and Sunday night in October, you can also experience Escape from Blood Prison - where freaky inmates create a bloodcurdling experience.

Fall is synonymous with Halloween and adrenaline-inducing haunted attractions, whether historical or more for a laugh with friends. Those who dabble in the paranormal world or enjoy the jolt of being frightened will find plenty of options in Ohio.