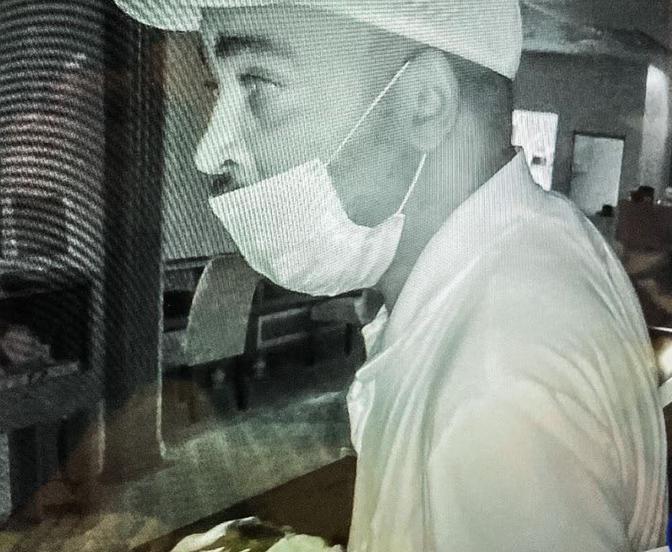 At approximately 8:49 p.m. on Aug. 13, 2021, officers responded to a report of a burglary in progress at the jewelry store. When officers arrived, it was determined someone had forced their way into the store and removed jewelry.

The suspect is described as a black male, 50 to 60 years old, about 6 feet tall and approximately 220 pounds. He was wearing a dark blue Jeff cap, blue surgical face mask, a blue polo style t-shirt with white strips, dark colored khaki shorts, and black shoes. This man was also wearing gloves that resembled golfing gloves and a compression sleeve on his left arm that had, “ER fit” towards the wrist, which is likely the brand of compression sleeve.

The second suspect is a black male, 45-55 years old, about 5″8″ to 5’10” tall and 190 pounds. He was wearing a dark blue baseball hat, black framed reading glasses, a brown t-shirt, yellow gloves, white socks, and light blue New Balance shoes with a white sole.

Pryce, 55, was charged by police in Lancaster County with stealing $60,000 worth of rings in a distraction theft at an antique bazaar in 2018. Pryce and an unknown man distracted a stand owner at Renninger’s Antique Market and stole 72 antique rings. The theft was captured on surveillance video.

The burglary is currently under investigation. The West Chester Police Department is asking anyone who can identify the persons in the photos below to contact the criminal division at 610-696-2700.

Police reports from across the region:

On Monday, Aug. 23, 2021 at 1:55 a.m., the West Chester Borough Police Department responded to the 50 block of West Gay Street, West Chester Borough, for multiple reports of shots fired. Once arriving at the location, WCPD officers located several bullet casings in the area. There are no suspects identified and it appears no one was injured during this incident. police said. 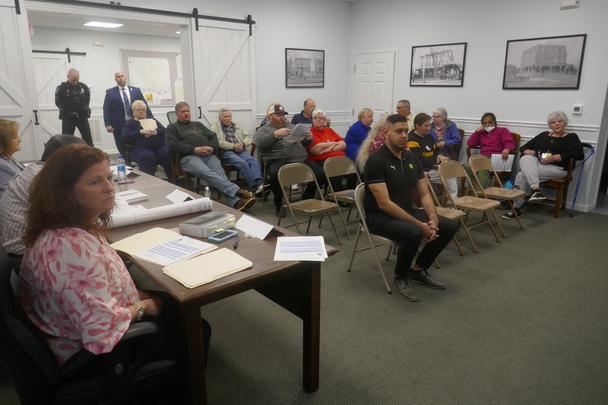 On Aug. 21, 2021 at 1 a.m., police responded to a report of a subject that threw a glass bottle from the Bicentennial parking garage, 20 South High Street on the roadway almost striking pedestrians. Officers made contact with a male in the parking garage and conducted an investigation. David Paul Andrews III, 21, of Wilmington, Del. was taken into custody. He was charged with propulsion of missiles and related charges. Andrews was processed and released and summons.

On Aug. 23, 2021 at 8:45 p.m. officers was dispatched to residence in the 1300 block of Bridge Road, East Bradford Township for a report. The victim reported that a man had pointed a firearm at him and threatened to shoot him. Through the investigation William Swanson Stinnette Jr., 33, of West Grove, was taken into custody. He was charged with Terroristic Threats and related charges. Stinnette was transported to Chester County Prison for arraignment.

On July 31, West Chester Police responded to 222 North Church Street for a report of a stolen vehicle. Upon further investigation, it was determined that Erica Schwab, 35, from Exton, took possession of the vehicle without permission, and failed to return it. On Aug. 5, she was taken into custody after a warrant was issued for her arrest. She was processed and transported to Chester County Prison for arraignment.

On July 26 at 11 a.m., officers responded to the Rite Aid pharmacy in the 50 block of East Gay Street for the report of a retail theft. The suspect fled prior to police arrival. Through investigation, Richard Hughes, 42, from West Chester was identified as the offender. An arrest warrant was issued, and on Aug. 13,, Hughes was taken into custody when he was committing a separate retail theft at the Giant grocery store at 698 Downingtown Pike, East Bradford. Hughes was charged with both retail thefts.

On Friday July 30, 2021, officers responded to the 200 Block of West Chestnut Street for a fight between two men. After an investigation, a warrant was obtained for the arrest of Walter Stevenson, 45, from West Chester. Stevenson was arrested on Aug. 15, 2021. Stevenson was charged with aggravated assault and other related charges. Stevenson was transported to Chester County Prison.

The West Whiteland Township Police Department is investigating a burglary that occurred at the Exton Bicycles store. An unknown person entered the store at approximately 3:53 a.m. and began removing bikes from the business. A similar burglary of a bike store occurred on the same morning at a business on West Chester Pike in East Goshen. It appears both incidents are related. Anyone with information is asked to contact Det. Scott E. Pezick at 484-875-6021 or spezick@westwhiteland.org.

Oxford police are looking for the public’s assistance to identify a suspect wanted for criminal mischief in the parking garage, 3 Octoraro Alley which occurred Wednesday, Aug. 18, 2021 at 8:05 p.m. The suspect operates a 1996 silver Honda sedan. Anyone with information is asked to call the OPD at 610-268-3171. Reference police report No. OP-21-02317.

On July 24, 2021 at 6:38 p.m., police arrested Wilber Vasquez, 26, at Broad and Niblock Alley from a felony warrant issued in 2019. After a collaborative investigation between the Oxford Police Department and Chester County Detectives, Vasquez faces 16 charges related to distribution of narcotics.

On Aug. 4, 2021 at 3:30 a.m., police arrested Rebecca Nancy Devito, 24, of Oxford. Police officers were dispatched to the Whitehall Acres Apartments, 200 block South Fifth Street for a domestic disturbance. The victim alleges Devito lunged at them with a knife. Devito was taken into custody without further incident. A preliminary hearing is pending at the Oxford District Court.

Daniel Eaton, 35, of Kennett Square was charged with simple assault and harassment, following an altercation, during which he allegedly grabbed a female subject and left visible red marks on her arms. The incident occurred on Aug. 11, 2021 at approximately 6:29 p.m., in the 800 Block of South Walnut Street, Kennett Square.

On July 28, 2021, at approximately 3:24 a.m., officers were dispatched for a domestic assault involving a firearm in the 300 Block of Lafayette Street, Kennett Square Borough. Once on scene, Officers were told that Jose Lopez-Cintora was threatening to commit suicide with a shotgun, which was taken away from him by the victim. Lopez Cintora attempted to break into a bedroom where the victim was located to retrieve the firearm once it was taken away from him. Officers were able to confiscated and secure the firearm without incident. Charges were filed.

On Aug. 3, 2021 at 10:10 a.m., officers were dispatched for a well-being check in the 500 Block of West Cypress Street, Kennett Square Borough. Upon arrival, officers observed a female, later identified as Gabrielle Small, laying on the sidewalk who appeared to be confused and whose demeanor was consistent with that of an individual under the influence of controlled substances. Small was taken into custody and a search of her belongings was conducted resulting with her to be in possession of marijuana and multiple other drug paraphernalia. Gabrielle Small was transported to Central Booking at Chester County Prison and charges were filed.

Carlos A. Brown, 22, of Lancaster was arrested and charged with carrying a firearm without a license and violations of the Controlled Substance, Drug, Device and Cosmetic Act (Act 64), after he was found to be in possession of a pistol and marijuana, following a traffic stop. The incident occurred on June 11, 2021 at approximately 4:06 a.m., in the 200 Block of South Mill Road, Kennett Square Borough. On July 19, 2021 the Pennsylvania State Police Firearms Division verified at the time of the incident Carlos A. Brown did not have a valid license to carry a firearm or a valid sportsman firearm permit. Charges were filed a warrant was issued on Aug. 9, 2021.

On Aug. 4, 2021, the Westtown-East Goshen Regional Police Department was dispatched to a residence on S. New Street in Westtown Township, for a report of a stolen vehicle. Upon arrival by patrol officers, it was discovered that the residence was also burglarized while the family was away on vacation. Patrol officers and the Criminal Investigation Division processed the scene and developed a suspect. Shortly after police cleared the scene, an alert person observed the suspect returning to the area. As a result of a quick police response, officers were able to conduct a traffic stop and positively identified the operator as Rashonna Fitzgerald from Chester, Pennsylvania. She was subsequently arrested and charged with numerous offences relating to the burglary and vehicle theft. Fitzgerald was arraigned by Magistrate District Justice Martin Gosh where she failed to post $20,000 cash bail. She was processed and transported to Chester County Prison pending a preliminary hearing. The West Goshen Police Department also assisted with this arrest.

The Westtown-East Goshen Regional Police Department, Criminal Investigation Division, conducted an investigation involving the fraudulent use of the victim’s identity to title a vehicle in Philadelphia. The vehicle was then used to commit numerous thefts in the tri-state area. With the assistance of Plymouth Township and Upper Chichester Police Departments, detectives were able to identify Vanessa A. Watts as the perpetrator and an arrest warrant has been issued.