Home → Furniture purchase → Vintage View: How Charles Darwin led the way in the evolution of the office chair 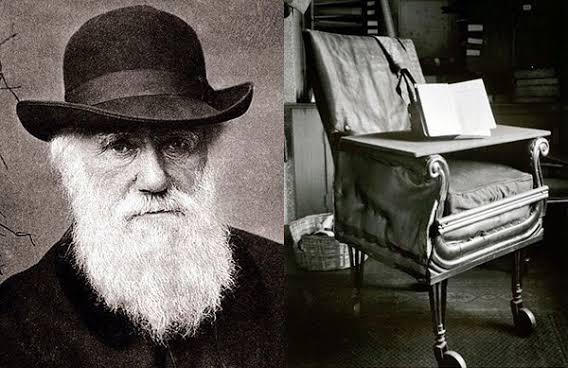 Vintage View: How Charles Darwin led the way in the evolution of the office chair

Ladies had lighter chairs they could shuffle up to their bonheur-du-jour, prettily shrouding them almost completely under their skirts.

Men (presumed to be writing actually important things) had to deal with larger more cumbersome chairs, that had evolved little since Georgian times.

With arms to steadily support a quill or ink pen under the elbow, unless the chair included a revolving mechanism, you were pretty well trapped into a vertebrae freezing diorama.

Darwin wanted a means to scoot across his workspace to his specimen cabinet without staggering to his feet.

Taking a short break from developing the most vital writings of modern science, he fixed clunky brass wheels to his typical scroll-armed, leather desk chair.

With this simple creature-comfort, he had incidentally introduced the design theories we have enjoyed for the following century and a half.

Swivels, castors, springs and extra padding became essential for the productivity of a burgeoning army of clerical staff that grew out of the industrial evolution, the extension of the railways and the explosion of a literate, middle class.

The idea of engineering a chair for desk-bound administrators took off at banks, hospitals, factories and government departments, with new designs including the iconic Thomas E. Warren’s Centripetal Spring Armchair in New York. C.1849 It looks like it’s intended for a pantomime stage.

Fully upholstered, bouncy under the bum, with adjustable elements, this steam-punk innovator must have been heaven compared to a wooden saddle seated stool screwed to the floor or a stiffly buttoned Windsor chair.

Crucially, the notion of human friendly, height change and lumbar support began to emerge. With hours over paper-work, the truth was – the back doesn’t lie.

Captains’ chairs that tilted under a man’s reclined weight, and revolved to address inferior male visitors elegantly without the need to get up and lose any status, also allowed the user to shift around and flex their legs and back while reaching for documents.

These pricey, hand-built commercial thrones became popular for the studies of the rich and upper management positions.

In a moment of weird egalitarianism, Otto Von Bismarck, Chancellor of Germany, took an interest in the office chair, patronising new forms of seating to be used in parliament. Barbers and dentists chairs with their mechanical talents were forensically examined.

For most workers, a pretty primitive wooden chair (not always with a back) was the best they could expect while clerking. Being in any sort of control of your spine was out of the question.

The notion of comfort and ergonomics took some time to develop.

Sitting up straight (in whale bones stays if you were a very lucky girl) was seen as essential to a noble, stoic character in the 19th century.

Lolling on sofas, chaises and other furniture with bolters and padding was viewed as suspicious, “continental” behaviour.

For working families, polite notions like repetitive-stress-disorders, comprised of keeping the family fed and not getting shot out of a French trench.

Metals and many other high end materials were embargoed for the war effort right through to the mid-1940s, stirring innovation in other fabrics.

The period between the 1920s and 1950s saw a fervent exchange of international ideas which blew away the stuffy Victorian interiors and choking etiquette.

By the mid-century, the truly comfortable, handsome office chair was a key moment in the life of any industrial designer with an interest in furnishings and prestigious awards. 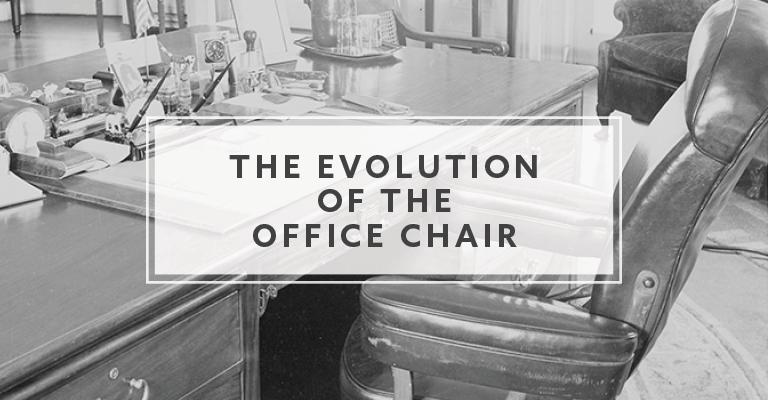 If there’s one chair that shows how far office chairs had rolled to biomorphic bliss since Darwin zipped across this work-space at Down House, it’s the Ergon c.1966 designed by Bill Stumpf (1936 – 2006) for the house of Herman Miller.

The fully upholstered Ergon was the first fully researched chair, that took several years go develop, and all the ergonomic science thrown at it had the needs of the human body in al it’s tiny nuances, front and centre.

Stumpf used prototypes, x-rays and extensive product testing to develop the Ergon at a time when Eames was leading the field in pricey American corporate seating.

By the 1970s, and if you were performing well, you could lean back, slouch, even tuck your feet under your body without a tut-tut.

You can find the Ergon second hand, but they are generally heavily used with failing mechanisms.

The latest version was the 3, and a chrome based Ergon from the 1970s can set you back anywhere from €50 to over €1,000 depending on fabric and condition.

Don Chadwick and Stumpf continued to develop a category of chairs dubbed “humanonic seating” which allowed the body to not only move, but to breathe through healthy ventilated fabrics and foams.

Next up for the brilliant, tireless Stumpf, was the Aeron c.1994. Now, with its mechanics all hanging out, I think the Aeron is ugly and due to the number of chairs out there on the market, it has picked up an adolescent, gamer buzz.

The woven back (pellicle) almost begs to be punctured by a determined cat or ball-point pen in the back pockets.

In terms of colour, the Onyx is a dramatic ultra-black shade intended to modernise Aeron.

In colours, Graphite is a distinctive dark grey, with a classic textured finish. Carbon offers a balanced neutral that works equally well in warm and cool environments, while mineral is the lightest and the firm argues, illuminates Aeron's finer points, ideal for open floor-plans and spaces.

The Aeron now features 50% recycled materials, including what’s termed “ocean-bound-plastic” (abandoned plastic waste otherwise on its way to our oceans).

In three sizes that defies even the 95% percentile demanded of a standard heavy use office chair, it can fit every body type. I can see Darwin, who was a six footer with a stoop, darting about in a highly adjustable Aeron, his moustache blown gently to one side with the velocity.

Expect to pay around €800 for an Aeron on sale, and €500 plus for something lightly used, and fully refurbished on Ebay for example. If the chair is on show – spend the extra on polished chrome elements.

My alternative for a sculptural, iconic biomorphic if you want a 007 arch villain bit of flash for the home office, is the HumanScale stable of Neils Diffrient, also born in New York city – a company that also tempted in Don Chadwick for commissions.

The freedom chair, once sized to your body requires no dials or levers, it just moves around like you as a leathery exoskeleton in synchronised movement.

It’s utterly exquisite, and features in dozens of block-buster movies and television shows. Diffrient decided to ditch the separate lumbar support, believing it actually creates a pressure point in comparison to a fully articulate chair.

For leather, and a head-rest design, you won’t get any change from €1,000 for the new Freedom, so look out for second hand examples in good condition.

The World chair by Humanscale has that mesh back see in the Aeron, but is a far more elegant chair for home office use.

The tri-panel mesh back provides custom back and lumbar support while the seat has no under buttock framing – you are literally sitting on air with Form-Sensing Mesh.

Again, there are no levers, the World chair is cruised through all its motions by physical movement, so sit into one to ensure that unique feel and liquid balance will keep you on task.