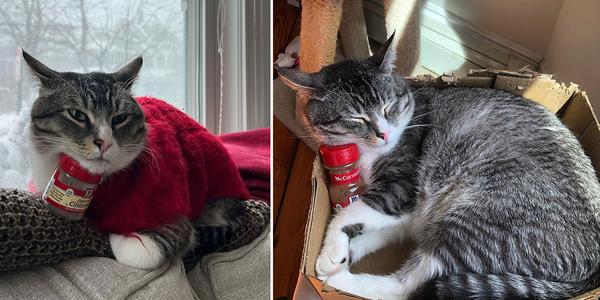 Winston Naughty Paws: The Story Of a Cat…and His Cinnamon Bottle

We all know how much our kitties love their toys. Whether it be stuffed mousies, balls they can bat under furniture and then lose, or feathery things that hang from a scratching post. But this is the story of a cat and his, um…cinnamon bottle. A cat whose name is Winston Naughty Paws, and he’s about as cute and rambunctious as kitties get.

And Winston’s humom, Emily tells Cole and Marmalade she thinks the reason her little guy loves his cinnamon bottles is that they fit his little paws perfectly.

“Nothin’ quite like naps in my box with my cinnamon,” writes Winston’s humom Emily.

Emily and her husband adopted this cuddle bug, who’s somewhere between three and four years old from a local shelter in the Boston area where they live. And not long after that, they discovered sweet Winston’s love of cinnamon bottles and comfy sweaters. Clearly, this cutie is an unusual little guy, because most cats do not share his affinity for wearing sweaters.

But Winston began vibing with cinnamon bottles after Emily and her partner had used up the last of one and placed it on the windowsill to be taken out with the recyclables later in the day, Discovery Time reports. Winston had other ideas, however, and grabbed it for himself. Now it was his, all his, and he cuddled with it in his box. 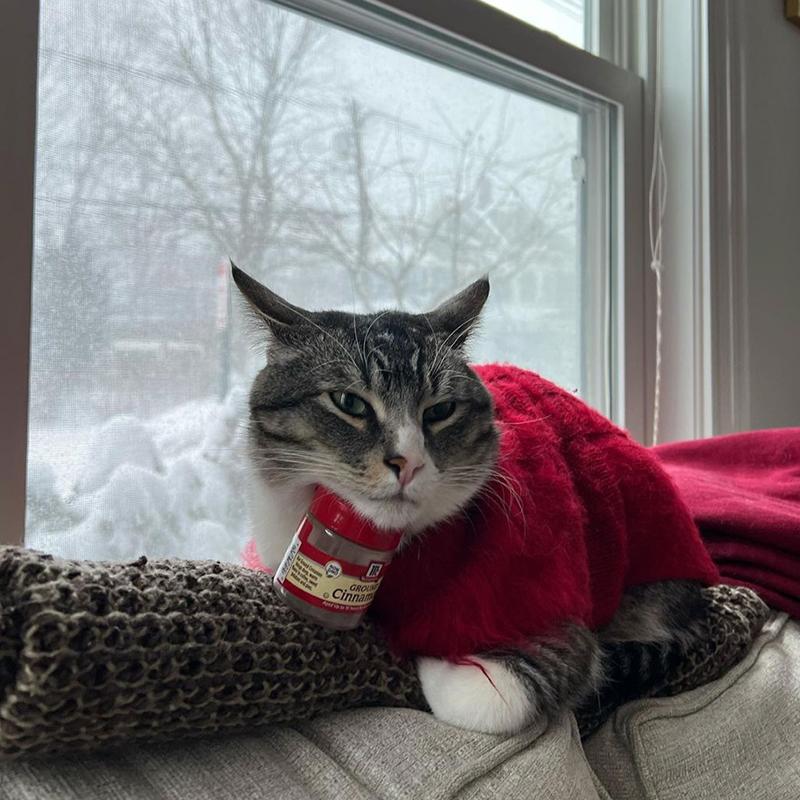 Winston’s predilection for cinnamon bottles puzzled Emily and her partner at first. He’d cuddle with it for hours and then get grabby whenever they took it away.

“He has a very strong grab-and-pull reflex, so any time he’s snuggling with the bottle, he is very resistant to it being taken away,” Emily told Discovery Time. “He’ll hug it to his chest with both of his arms.”

Over time Winston’s parents realized the spice bottle was a perfect toy for him because he can’t bite through the hard plastic and his little mouth can’t reach all the way around it.

“Because of that we haven’t had to take [it] away from him,” Emily says.

This was definitely a good thing because Winston “is obsessed with food, and just eating in general, he will literally eat his toys, especially the soft ones.”

I’m so glad they found something that can’t harm this sweet little fellow. And when you couple that with his love of warm sweaters, you definitely have one special kitty.

For Winston, those soft sweaters give him the warm fuzzies for those times he’s feeling anxious and perhaps a bit rambunctious. Emily tells me “he is really crazy and the sweaters make him calm down! Plus, it is cold where we live,” she added. One thing is clear: Those sweaters and cinnamon bottles are what makes Winston so durned-cute! He looks so comfortable in his box below, wearing that blue sweater, with his toy doughnut and cinnamon bottle by his side. Why can’t life always be this simple?

What’s also clear is Winston is a kitty with a mind of his own, as we see in the Halloween photos below. And Winston being Winston, Emily began sharing his adorableness on TikTok. He’s definitely popular, with more than 40,000 followers and more than 1.2 million “likes.”

“Happy Halloween! I did NOT want to take a family photo 🧡”

Emily tells me she is going to grad school to become a Clinical Psychologist, “and still haven’t yet decided which program/where will be moving!” This definitely sounds exciting! And we’re glad beautiful green-eyed baby Winston will have his cinnamon bottles and comfy sweaters to snuggle with.