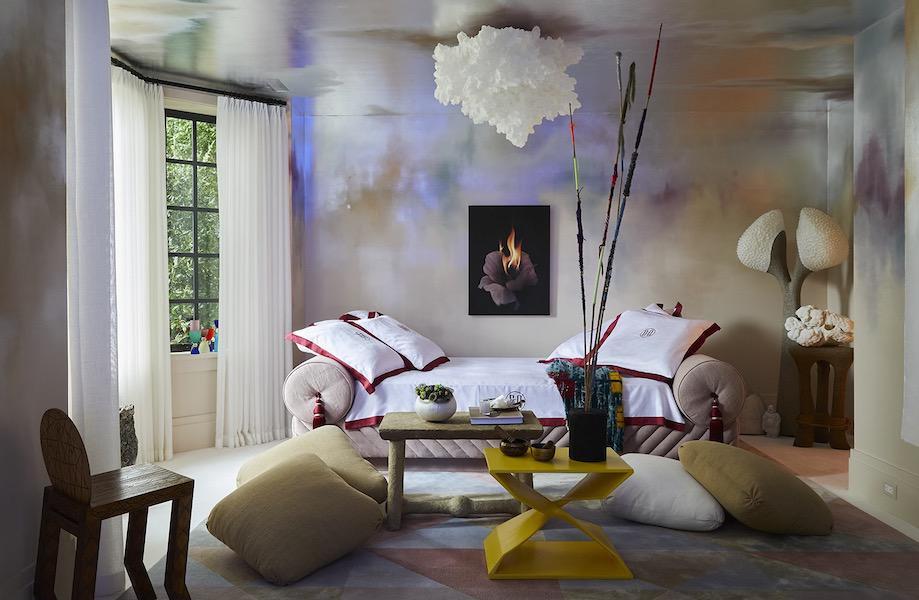 Easily one of the most in-demand artists in town (and out of town, for that matter), Lizarraga works her magic on floors, yes, as well as on walls, furniture, and anything else her clients want. You can see her painterly answers to such anything-goes desires in boutiques and restaurants in SF and around the country, and even in the personal home of the iconic burlesque performer Dita Von Teese.

While we've been following—nay, obsessed with—Lizarraga and her mad mural skills for quite some time, we were curious as to how the Piedmont-based painter would describe her art-slash-decor to those unfamiliar with her portfolio.

"Oh, this is a good question—and hard! I would say a few things: I am trying to bring fine art to your walls and turn your basic walls into jewel boxes. And, simultaneously, I'm using old-world techniques but bringing a modern twist to them. I am obsessed with the complexity of colors and patterns. Most importantly, though, I am trying to evoke a feeling, to create environments for my clients," she explains.

Her mission is accomplished. Lizarraga's singular style seems to connect with people on a visceral level and is also getting attention from myriad magazines—such as Elle Decor,AD, Martha Stewart Living, and Dwell—that regularly feature her work. To understand her art's ability to bewitch is to understand the young girl who grew up in West Marin decorating the rooms of a dollhouse made by her grandmother and the wending journey she later took to find her life's passion and develop her craft.

Lizarraga's home is characteristic of her luxe, maximalist style and, of course, its walls are covered with her own exquisite designs.(Christopher Stark)

Lizarraga went to college focused on fashion, which remains a great inspiration for her. After some time, however, she started to question if it was the right career.

"I decided to listen to my heart and make the bold choice to begin finding my passion, which led me on a bit of a treasure hunt. I remember going to flea markets and garage sales, buying furniture. It was strange, as I would see a piece and have a sudden epiphany, a complete vision of what it should look like—all the modifications needed—even though I really had no idea what I was doing! The first piece I bought was $20, and I turned it into my vision. An interior designer saw the finished product and made an offer of $1,200. At that point, I thought maybe I was onto something. I ended up keeping the piece, but decided I wanted to learn more about furniture and restoration on a professional level," she recounts.

Enter a study-abroad program in Florence, Italy, and a coveted apprenticeship with a restorer who worked on pieces for the local church and museums like the Uffizi Gallery. "This gave me the amazing opportunity to access the private libraries at the Uffizi. Think about this: You could go into the library and take out sketches from Michelangelo or Leonardo. It was absolutely incredible," Lizarraga remembers.

Fast-forward 20 years or so and it's easy to see how her time in Florence served as a springboard to her present-day career as a successful decorative artist who's juggling 30 projects around the globe along with a large, talented team (and a baby).

Even though she knew restoration wasn't exactly her path, it was pretty close.

"When I came back to the U.S., I was introduced to a decorative painting studio—that was where everything began for me. I still remember the feeling when I saw what was happening there. All the exquisitely painted marbles, stones, chinoiserie, plasters. It was all old-world techniques being brought to life in San Francisco. I apprenticed there for many years, learning as much as I could until I felt I was ready to go out on my own," she says. 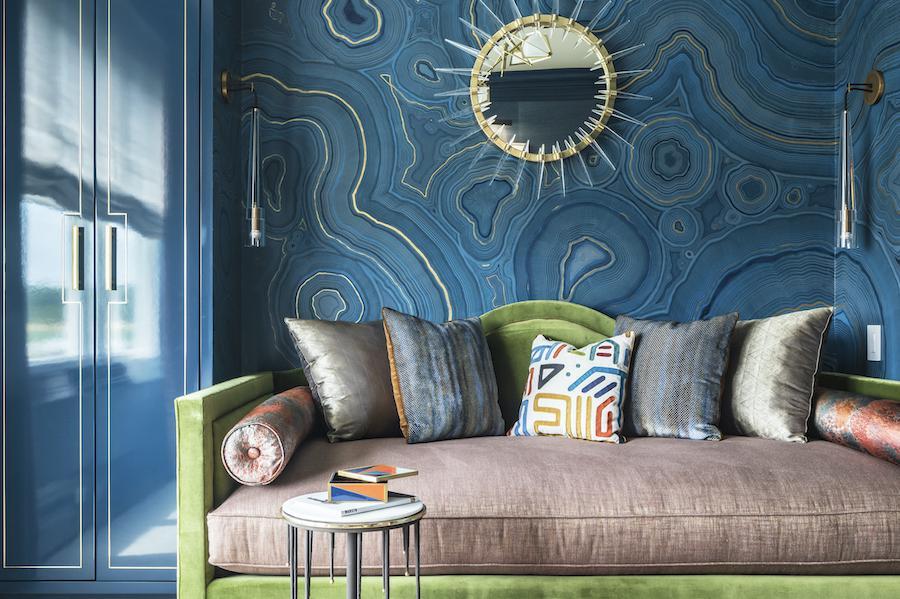 When she did make that leap, Lizarraga quickly earned buzz and clients aplenty, including many in the restaurant world, which she finds particularly exciting and fulfilling.

"People spend limited time in a restaurant so there's limited time to create a particular feeling—we can create an atmosphere that is more dramatic. Plus, chefs are also artists, and I love telling their stories or translating their messages through the walls I am making; it's truly a magnificent way to complement their food. Most people don't realize how much every single detail is thought of in a restaurant," she says.

One of Lizarraga's first restaurant clients was Bottega in Napa Valley, circa 2008. The chef (Michael Chiarello) and his wife were so taken by her work they broke a contract with another decorative artist to hire her. Talk about an auspicious start. Soon thereafter came the original restoration of SF's iconic Tosca. The project called for the space to look like it did 100 years previously. In other words, Lizarraga's Italian restoration experience came in handy.

"Being a woman in the male-dominant construction world, I really love working with female chefs, as it's a similar environment. I met Kim Alter from Nightbird while I was working on the jazz club Black Cat. We worked hard to get her story across in her space: feminine but not overly so, sophisticated yet organic, simplicity with a little glam. In the end, that restaurant really put us on the design map. It has been featured in so many publications.

Kim introduced me to Melissa Perello who owns Frances, Octavia, and M Georgina in Los Angeles which we completed right before Covid. I also worked with Jen Pelka who owned The Riddler in SF and NYC. (Sadly, they both permanently closed during the pandemic) And, of course, the restaurant I might be best known for is Robin, the omakase restaurant in Hayes Valley where we poured rose-gold down the wall. Robin's owner, Adam Tortosa, had been watching my work for a long time. When he knew he was going to open a restaurant, he wanted to do something very different in SF so he contacted me. We wanted something no one had ever seen, and a little edgy. We were so afraid people wouldn't get it, but the risk paid off. People love it so much!" she says.

While Lizarraga can't get her fill of working on restaurants, she loves working on all types of spaces. It's about the people, she explains.

"When a person is open, trusts us, and is willing to try something new? That's music to my ears...and when a project truly soars. I value that clients allow us to access their intimate life and a place they consider home."

So what happens when a client, is a bit more, err, controlling? "It creates a very contrived look," she admits.

When asked about her favorite project of all time, she doesn't hesitate: It's Dita von Tesse's home for the win. As a big fan of the performer, Lizarraga was thrilled (she actually screamed out loud) when the glamour-puss emailed her about collaborating on her L.A. home.

"My goal was to design something that reflected her character and her individual style. I flew to Los Angeles to present my ideas to Dita, and it was the most perfect match. We both share a love of vintage, color, glamour, and a generally maximalist approach which made the ideas flow easily," Lizarraga says.

Ms. L and team worked on virtually every room in Von Teese's unique 1920s English Tudor-style home, including painting the walls up the stairs to look like French lace; painting strands of pearls and tassels to look like they're holding up her artwork; and giving the kitchen walls a stunning green malachite treatment.

The dining room has a lacquered ceiling and hand-painted grisaille (a technique using gray monochrome to mimic sculpture). "Plus, we found old photos from the '20s of burlesque dancers and decoupaged them into hand-cut glass gems. On her dining table, we used a technique called verre eglomise, which is applying paint, golf leaf, and lacquer to the back of glass. The center is antique mirror and, around the perimeter of the glass, we did 24-karat-gold beaded tassels. Awesome!"

There are more awesome projects in Lizarraga's immediate future. "We currently have a little obsession with jewelry stores. A lot of people have seen snippets of Lauren Harwell Godfrey's new private atelier. We are also working with my dear friend from Metier. Jewelry aside, we've also been asked to do many walls for Nicole Fuller for this summer's Galerie showcase house in the Hamptons. There are tons of incredible projects that we are always working on, but these are the highlights. Things are busy."

Caroline Lizarraga at home in front of one of her hand-painted walls, along with her pup Magellan and her daughter, who she affectionately calls Peach.(Christopher Stark)